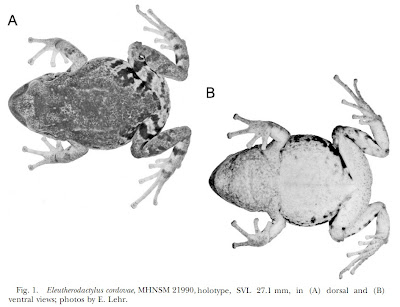 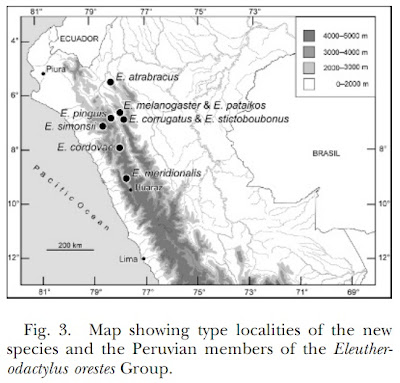 Fig. 3. Map showing type localities of the new species and the Peruvian members of the Eleutherodactylus orestes Group.

Distribution and ecology.— Eleutherodactylus cordovae is known from four localities at elevations of 3400–3985 m between Quiruvilca and Huamachuco (airline distance 37 km) on the eastern slopes of the Cordillera Occidental in northwestern Peru (Fig. 3); calls of E. cordovae were heard up to 4010 m. These localities are in the Puna Ecoregion, as defined by Brack (1986). At the type locality, the dominant vegetation consists of Polylepis sp. and Peruvian Feather Grass (Stipa icchu). All specimens were found under rocks between, or in, clumps of Stipa icchu near small streams. Males called from within clumps of Stipa icchu at 1630–2300 hr.Gastrotheca peruana occurs sympatrically with E. cordovae. Eleutherodactylus cordovae has the local name ‘‘Rana campanita.’’ Rana is the Spanish word for frog, and campanita is the Spanish word for little bell. The local name, ‘‘little bell frog’’, refers to its call, which sounds like a little bell. 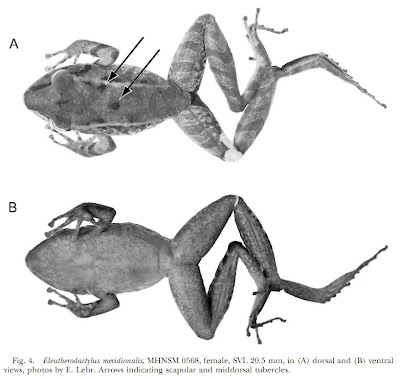 Etymology.— The specific name is a Latin adjective meaning southern. The name is used in reference to the species being the southernmost Eleutherodactylus in the Cordillera Occidental.

Distribution and ecology.— Eleutherodactylus meridionalis is known only from the type locality, Caraz (Fig. 4), in the northern part of the Callejo´n de Huaylas in the Rı´o Santa Valley at 2290 m. This area is in the Mountain Steppe (Serranı´a de Esteparia) Ecoregion (Brack, 1986). Nothing is known about the natural history of this frog.