The taxonomic affinities of the monotypic owl genus Sceloglaux Kaup, 1848 have been widely debated. Here, we present a high-coverage mitogenome for the sole member of the genus, New Zealand's extinct laughing owl (Sceloglaux albifacies Gray, 1845), and assess its phylogenetic relationships. Our results provide strong support for Sceloglaux being nested within Ninox Hodgson, 1837, as sister taxon to the clade containing the barking owl (Ninox connivens Latham, 1801), Sumba boobook (Ninox rudolfi Meyer, 1882), and morepork (Ninox novaeseelandiae Gmelin, 1788). Accordingly, we synonymize Sceloglaux with Ninox, and recommend that the laughing owl hereafter be referred to as Ninox albifacies. Osteological analyses and a comparison of the wing and leg proportions of the laughing owl with those of other owls supports Gould's (1865) contention that it was largely a terrestrial owl, and predominantly caught prey on the ground. This is further supported by the relatively high abundance of terrestrial prey remains preserved in sediment deposits at former laughing owl nest sites. 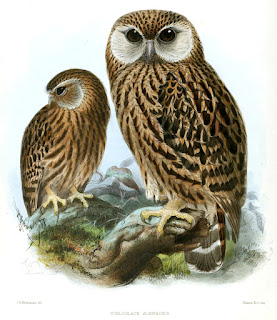 Conclusion
Analysis of mitochondrial DNA reveals that the New Zealand endemic laughing owl, formerly Sceloglaux albifacies, is nested within the genus Ninox. We therefore recommend that the laughing owl hereafter be referred to as Ninox albifacies. This result supports previous interpretations about the phylogenetic relationships of this taxon. A more complete molecular analysis, including all representatives of this diverse owl genus, is likely to provide interesting insights into the phylogeographic history of Ninox across the Asian and Australasian regions. Our morphometric and osteological analyses of N. albifacies identified a range of adaptations for a terrestrial lifestyle, but no loss of flight ability, suggesting that N. albifacies had adapted to occupy the niche of a large nocturnal predator of a predominantly ground-dwelling fauna.