A new legskate, Sinobatis andamanensis sp. nov. is described from a small collection of specimens taken off Phuket (Thailand) during an exploratory survey of the Andaman Sea. It is the first species of Sinobatis and the only legskate known from the northern Indian Ocean. Sinobatis andamanensis sp. nov. has an especially long and narrowly pointed snout (preorbital length exceeding 23% TL) with an interorbital distance 7–9.5 in snout length (up to 6.7 in other Sinobatis species). Molecular data are unavailable for most members of the genus, but based on morphology it shares with S. caerulea bluish dorsal and ventral surfaces when fresh and a long ventral head (length 36–42% TL). As well as differing in several morphometric differences, Sinobatis andamanensis sp. nov. seems to be a much smaller legskate (males adult from 186 mm DW vs. still immature at 540 mm DW in S. caerulea). Sinobatis bulbicauda also has an expanded posterior tail, but S. andamanensis sp. nov. differs from that species in having a narrower disc (width at anterior orbit 3.7–4.9 vs. 5.2–7.8 times mouth width) and anterior pelvic-fin lobes (base width 2.7–5.0 vs. 1.7–3.2 in distance between pelvic-fin origins), and shorter and less-conical tooth cusps and fewer vertebrae (total centra 126–133 vs. 148–171). 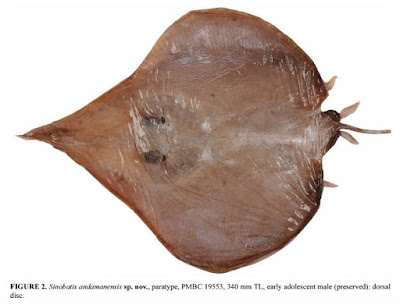