The cat-eyed snakes of the genus Madagascarophis are among the most commonly encountered snake species in Madagascar. Yet despite their broad distribution and frequent occurrence in human-disturbed habitat, Madagascarophis still contains unrecognized species diversity. Here, we describe a new species of Malagasy cat-eyed snake from a specimen found in the tsingy karst system of Ankarana in northern Madagascar. Using multiple loci from all currently described species, including the never-before-sequenced M. ocellatus, we delimit a new species and also determine its placement within the genus in a Bayesian coalescent framework, using BPP and *BEAST, respectively. Our results indicate that molecular data are sufficient to delimit this new taxon. These data also support its placement as the sister taxon to the recently described M. fuchsi which is endemic to the Montagne des Français karst massif also in northern Madagascar. We also provide a morphological description of this new snake species, which can be readily diagnosed based on external morphological characters, and include a species identification key for the entire genus based on external morphology. 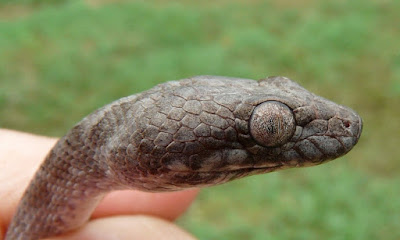 Natural history.— Similar to other species of Madagascarophis, M. lolo appears to be crepuscular/nocturnal; the specimen was found active on the ground at 1930 hours on tsingy karst rocks, in an exposed area with low scrub habitat. This is very similar to what has been described for M. fuchsi (Glaw et al., 2013a), and our own observation of the M. fuchsi sample included here, which we found outside a small cave in the karst system of the Montagne des Fran¸cais massif, approximately 70 km away. By contrast, the other species of Madagascarophis found at Ankarana, M. colubrinus, was common in canyon forests and surrounding relict forests, as well as in anthropogenically disturbed habitat. We suspect the reason that M. lolo has gone undetected for so long at Ankarana is that the exposed tsingy plateau has been poorly surveyed at night in previous expeditions due to problems of gaining safe access to these areas. Madagascarophis lolo may be endemic to the karst habitats of Ankarana, and possibly Analamerana, which is the closest karst system to the east.

Etymology.— The species name, lolo, is taken from the Malagasy word for ghost; it is a noun in apposition to the genus name. This name refers to 1) the ghostly pale gray color of the holotype, and 2) that M. lolo has eluded discovery for so long at Ankarana, arguably one of the better surveyed sites in Madagascar. 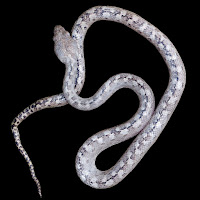