Abstract
We describe the anatomy of a new coelurosaurian theropod Aorun zhaoi gen. et sp. nov., from the Middle–Late Jurassic of Xinjiang, China. Histological analysis of the holotype and only known specimen shows that the new taxon is represented by the skeleton of a juvenile individual aged no more than one year. A phylogenetic analysis of theropod relationships places Aorun as a basal member of the Coelurosauria. Although the sole use of a sub-adult ontogenetic exemplar is potentially problematic for phylogenetic reconstruction, we show that the phylogenetic position of Aorun as a member of Coelurosauria is robust to the exclusion of characters known to change during theropod ontogeny. Aorun is the seventh theropod taxon, and temporally oldest coelurosaur, known from the Shishugou Formation, which has one of the most taxonomically diverse Jurassic coelurosaurian theropod faunas in the world. 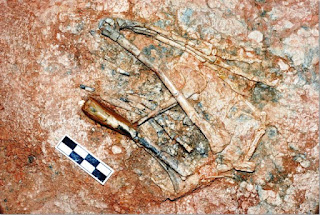