[Ichthyology • 2016] Schistura notasileum • A New River Loach (Cypriniformes: Nemacheilidae) from the main channel of the upper Mekong in Yunnan

Nemacheilid loaches are a common element of fish assemblages of Southeast Asian streams. In particular, streams in tropical and subtropical regions with a gravelly to rocky substrate and a swift current are typically inhabited by several species of nemacheilid loaches. Up to six different species are reported to occur syntopically (Kottelat 1990). The vast majority of these loaches are allocated within the diverse genus Schistura, which accommodates about 200 valid species (Kottelat 2012). River loaches of the genus Schistura are defined as having the mouth moderately arched; the lower lip medially notched, not forming lateral labial pads; air bladder without a secondary chamber, and a maximum size between 25 mm and 120 mm SL (Kottelat 1990).

Numerous species of Schistura are reported from the Mekong drainage. The upper part of the Mekong, referred to as Lancangjiang in Chinese, shelters merely 10 species of Schistura, namely S. amplizona, S. bannaensis, S. breviceps, S. conirostris, S. kengtungensis, S. kloetzliae, S. latifasciata, S. macrocephalus, S. porthos, and S. sexnubes (Zhu 1989; Kottelat 1990, 2000, 2001; Chen et al. 2005; Endruweit 2011, 2014a, 2014b). This may be due to the rather complex taxonomy of this group of fishes as well as to unfavorable climatic conditions, since a large part of the upper Mekong lies in temperate to alpine regions with low water temperatures. At higher elevations, Schistura are gradually replaced by Triplophysa. Eight of the 10 species of Schistura inhabiting the Lancangjiang are distributed in the very south of Yunnan Province, subtropical Xishuangbanna and adjacent Puer Prefecture (Zhu 1989; Kottelat 1990, 2001; Chen et al. 2005; Endruweit 2011, 2014b). The remaining two species were reported from the temperate Lincang Prefecture (Zhu 1989; Endruweit 2014a). During a recent ichthyofaunistic survey of the Mekong basin in Dali Prefecture, which is located north of Lincang Prefecture, 10 specimens of Schistura were obtained from baited traps left over night in the Mekong main channel. River loaches of the genus Schistura were hitherto unknown from the Mekong so far upstream. These specimens, which could not be allocated to any species reported from the Mekong or adjacent drainages, are herein described. 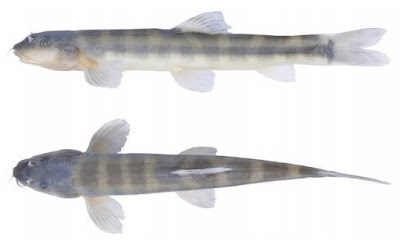 Distribution. Known only from the type locality.

Ecology. The type series of Schistura notasileum was obtained by using baited traps that were left over night in a water depth of about 10 m on the ground of the Mekong main channel. Coexisting fish species were Triplophysa brevicauda, Schizopyge lissolabiata, Schizothorax lantsangensis, Abbottina rivularis, Pseudorasbora parva, and Glyptothorax zanaensis. The turbid, green-brownish, slowly moving water had a temperature of 11 ºC, a pH of 8.3, and a conductivity of 510 µS/cm. Schistura notasileum was absent in typical Schistura habitats like small gravelly tributaries or along the banks of the main channel.

Etymology. Named after the kingdom of Nanzhao that was centered in Dali and flourished during the 8th and 9th centuries. The specific epithet is derived from the Greek notio vasileio, a transcription of Southern Kingdom or Nanzhao; latinized; a noun in apposition. 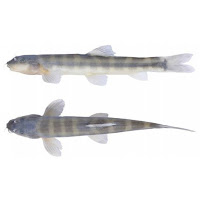