The fossil record shows that iguanian lizards were widely distributed during the Late Cretaceous. However, the biogeographic history and early evolution of one of its most diverse and peculiar clades (acrodontans) remain poorly known. Here, we present the first Mesozoic acrodontan from Africa, which also represents the oldest iguanian lizard from that continent. The new taxon comes from the Kem Kem Beds in Morocco (Cenomanian, Late Cretaceous) and is based on a partial lower jaw. The new taxon presents a number of features that are found only among acrodontan lizards and shares greatest similarities with uromastycines, specifically. In a combined evidence phylogenetic dataset comprehensive of all major acrodontan lineages using multiple tree inference methods (traditional and implied weighting maximum-parsimony, and Bayesian inference), we found support for the placement of the new species within uromastycines, along with Gueragama sulamericana (Late Cretaceous of Brazil). The new fossil supports the previously hypothesized widespread geographical distribution of acrodontans in Gondwana during the Mesozoic. Additionally, it provides the first fossil evidence of uromastycines in the Cretaceous, and the ancestry of acrodontan iguanians in Africa. 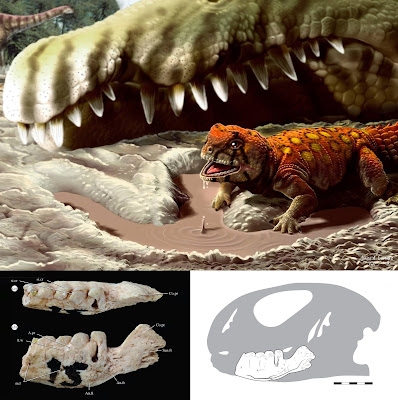 Etymology: Jeddaherdan refers to its close relationships with Uromastyx, meaning in the Amazigh berber language from Morocco, grandfather (jeddi) of Uromastyx (aherdan); ‘aleadonta’, meaning ‘dice teeth’ in reference to the cube-like dentition.

Type locality and stratigraphy: Cenomanian (Late Cretaceous) beds from the Kem Kem region of Southeastern Morocco, Gara Tabroumit (figure 2). These deposits have superbly preserved fossils, including fishes, amphibians, crocodyliforms and dinosaurs [56–59].The expeditions carried on by René Lavocat (1909–2007) resulted in hundreds of specimens collected from 1948 to 1951, preserved in the collections of the MNHN. They belong to the three Kem Kem localities worked by Lavocat, (Gara Tabroumit, Kouah Trick and Gara Sbaa). The material described herein was among the fossils collected from the first locality, and had been originally misinterpreted as a fish jaw in the collection. No specific data for the age of Gara Tabroumit is available, so the age for the specimen can range between the base of the Cenomanian to the Early Turonian (ca 90–100.5 MYA).