A recently published phylogeny corroborated the monophyly of the genus Pseudopaludicola and revealed several potential undescribed taxa. In this first integrative taxonomic study within the genus Pseudopaludicola, we describe the sister clade to the remaining long-legged species (Pseudopaludicola saltica + Pseudopaludicola murundu), the third recognized species of the monophyletic P. saltica clade, as a new species from northeastern Brazil. The new species is included in the P. saltica species group based on morphological (the presence of long hind limbs) and molecular evidence (mitochondrial genes). It is diagnosed by single, dark, subgular vocal sac with dark longitudinal folds in males, the presence of eleven pairs of chromosomes, and by an advertisement call composed of notes with up to seven non-concatenated pulses separated by regular interpulse intervals. We also describe the karyotype and tadpoles of the new species and compare them with the other long-legged species. Our populations are supported as an undescribed and independently evolving species within the P. saltica clade based on the generalized mixed Yule-coalescent (GMYC) species delimitation method. Although almost morphologically cryptic to P. saltica and P. murundu, this new species is distinguishable by means of acoustical and genetic traits. 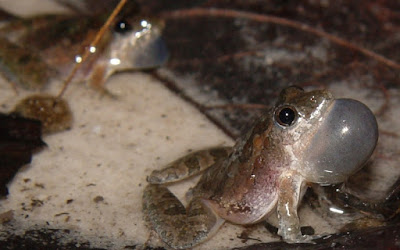 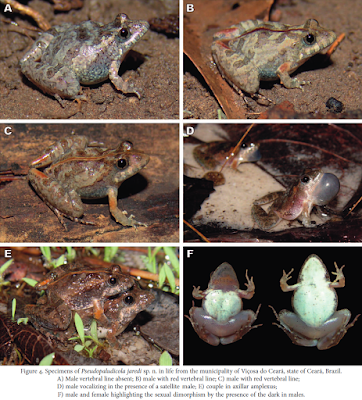