The taxonomy of the Late Jurassic pterodactyloid pterosaur Pterodactylus scolopaciceps Meyer, 1860 from the Solnhofen Limestone Formation of Bavaria, Germany is reviewed. Its nomenclatural history is long and complex, having been synonymised with both P. kochi (Wagner, 1837), and P. antiquus (Sömmerring, 1812). The majority of pterosaur species from the Solnhofen Limestone, including P. scolopaciceps are represented by juveniles. Consequently, specimens can appear remarkably similar due to juvenile characteristics detracting from taxonomic differences that are exaggerated in later ontogeny. Previous morphological and morphometric analyses have failed to separate species or even genera due to this problem, and as a result many species have been subsumed into a single taxon. A hypodigm for P. scolopaciceps, comprising of the holotype (BSP AS V 29 a/b) and material Broili referred to the taxon is described. P. scolopaciceps is found to be a valid taxon, but placement within Pterodactylus is inappropriate. Consequently, the new genus Aerodactylus is erected to accommodate it. Aerodactylus can be diagnosed on account of a unique suite of characters including jaws containing 16 teeth per-jaw, per-side, which are more sparsely distributed caudally and terminate rostral to the nasoantorbital fenestra; dorsal surface of the skull is subtly depressed rostral of the cranial table; rostrum very elongate (RI = ~7), terminating in a point; orbits correspondingly low and elongate; elongate cervical vertebrae (approximately three times the length of their width); wing-metacarpal elongate, but still shorter than the ulna and first wing-phalanx; and pteroid approximately 65% of the total length of the ulna, straight and extremely thin (less than one third the width of the ulna). A cladistic analysis demonstrates that Aerodactylus is distinct from Pterodactylus, but close to Cycnorhamphus Seeley, 1870, Ardeadactylus Bennett, 2013a and Aurorazhdarcho Frey, Meyer and Tischlinger, 2011, consequently we erect the inclusive taxon Aurorazhdarchidae for their reception. 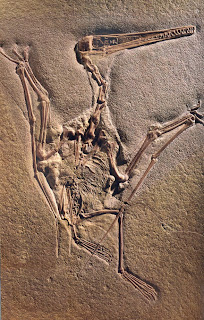 Content: The type species Aerodactylus scolopaciceps gen. nov. is the only species currently contained in Aerodactylus.

Diagnosis: As for type and only species.

Etymology: Aero = wind (Greek) + dactylus = finger (Greek), a common suffix in pterosaur names. The name derives from the Nintendo Pokémon Aerodactyl, a fantasy creature made up of a combination of different pterosaurian features. It seemed a pertinent name for a genus which has been synonymous with Pterodatylus for so long due to a combination of features.

1850 Pterodactylus longirostris Meyer, p. 199 [48]
When Meyer originally described the specimen he referred it to what is now known as Pterodactylus antiquus


Holotype: BSP AS V 29 a/b: part and counterpart, with a complete skeleton of a small juvenile.

The taxonomy of Pterodactylus is complex due to a suite of plesiomorphic characters that are retained in early ontogeny. Recently, Bennett referred “Pterodactylus longicollum” to the new genus; Ardeadactylus, and synonymised P. kochi with the type and (in our opinion) only species P. antiquus. This synonymy is likely to be erroneous considering that the focussed statistical analyses and a cladistics analysis presented here have demonstrated that “P. kochi” includes at least one other taxon. One such taxon within ‘P. kochi’ is “Pterodactylus scolopaciceps” Meyer 1860 [8]. “Pterodactylus scolopaciceps” is demonstrated to differ from Pterodactylus antiquus in the morphology of its skull and pteroid. Our statistical analysis finds that the two differ in the proportions of the orbit, humerus and pes, and so Aerodactylus gen. nov. is erected for the reception of “P. scolopaciceps”. Remaining specimens of P. kochi are found to have only a few proportions in common with P. antiquus. Notably, the cervical vertebrae of P. kochi are much shorter (nearly half the length when scaled to the same breadth) than those of P. antiquus, and thus we reject Jouve’s [24] and Bennett’s [2] synonymy. Further examination of the remaining specimens contained within P. kochi is required but our analysis suggests that it is generically distinct, and thus validates Diopecephalus Seeley, 1871 [52] (Vidovic and Martill in prep.). Furthermore “Germanodactylus rhamphastinus” is distinct from G. cristatus and requires further taxonomic evaluation. It is probable that “G. rhamphastinus” also belongs in Diopecephalus, as it has a straight dorsal rostrum, teeth beneath the nasoantorbital fenestra and short cervical vertebrae (Vidovic and Martill in prep.).