The sea krait Laticauda colubrina is the most widespread member of its genus, extending from the Bay of Bengal through much of Asia and the Indo-Malayan Archipelago to New Guinea and many islands of the western Pacific Ocean. Unconfirmed records of the species may extend the range to the western coast of Central America. The species is subject to marked geographic variation in a number of morphological and meristic characters that have to date defied finer taxonomic resolution. Two members of this complex previously subsumed under the specific name colubrina are here formally elevated to full species status. One species — Laticauda saintgironsi n.sp. — consists of those populations of L. colubrina s.l. found around the coast and in the coastal waters of the main island of New Caledonia. The second species — Laticauda frontalis (de Vis, 1905) — is a dwarf species found in sympatry and syntopy with Laticauda colubrina in Vanuatu and the Loyalty Islands of New Caledonia. 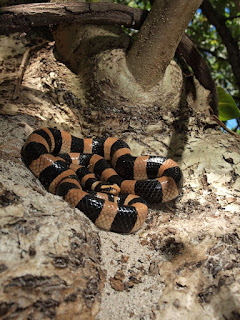 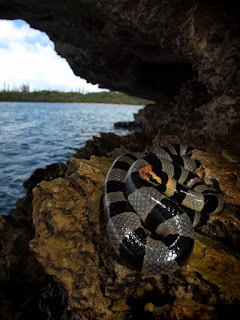