Abstract
Four new dragon millipede species of the genus Desmoxytes from northern Thailand are described and illustrated: Desmoxytes des sp. n. from Chiang Mai Province, Desmoxytes breviverpa sp. n. from Phrae Province, Desmoxytes takensis sp. n. from Tak Province and Desmoxytes pinnasquali sp. n. from Phitsanulok Province. The new species were compared with type specimens of closely related species and were all found to exhibit explicit morphological differences from these. They can be distinguished from other members of Desmoxytes by the shape of the gonopods, the sternal process between male coxae 4, the pattern of spines or tubercles on the metaterga, and the shape of the paraterga. The coloration of all new species is clearly aposematic: ranging from purple-pink to red. The new species are discussed in relation to their congeners, and a distribution map is provided.

Etymology. The species epithet is a noun in apposition and refers to the shape of the paraterga which reminds us of an ancient Egyptian flint knife (des).

Etymology. The name is a Latin noun in apposition, meaning “short intromittent organ”, and referring to the short, flagelliform solenomere.

Etymology. The name is Latin adjective referring to the province where the type locality occurs.

Etymology. The name is a Latin noun in apposition, meaning “shark fin” and referring to the shape of a process on lamina medialis. 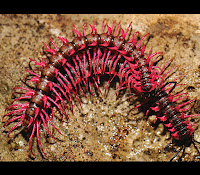 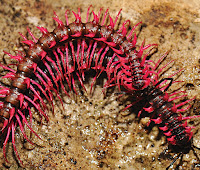