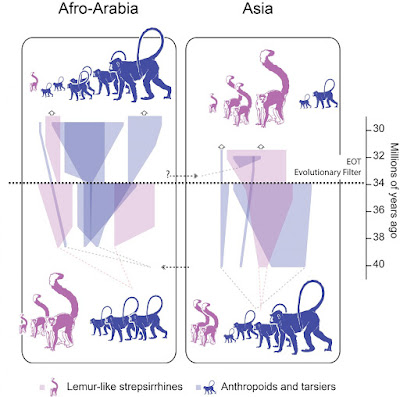 Profound environmental and faunal changes are associated with climatic deterioration during the Eocene-Oligocene transition (EOT) roughly 34 million years ago. Reconstructing how Asian primates responded to the EOT has been hindered by a sparse record of Oligocene primates on that continent. Here, we report the discovery of a diverse primate fauna from the early Oligocene of southern China. In marked contrast to Afro-Arabian Oligocene primate faunas, this Asian fauna is dominated by strepsirhines. There appears to be a strong break between Paleogene and Neogene Asian anthropoid assemblages. Asian and Afro-Arabian primate faunas responded differently to EOT climatic deterioration, indicating that the EOT functioned as a critical evolutionary filter constraining the subsequent course of primate evolution across the Old World.

Etymology: Generic name recognizes the geographic provenance of this taxon and its adapiform affinities.

Etymology: Generic name derives from the Mandarin“lao”(old) and the Malagasy“maky”(lemur). Trivial name reflects the geographic provenance of this species.

Etymology: Trivial name honors the pioneering work on the Caijiachong mammal faunas of Yunnan Province made by our friend and colleague Banyue Wang.

Climate filters dominant species
The transition between the Eocene and Oligocene periods was marked by distinct cooling. Because primate species are particularly susceptible to cold, this change in climate drove a retraction of primates globally. After this transition, anthropoid primates were dominant in Afro-Arabian regions, but little has been known about primate reestablishment in Asia. Ni et al. describe 10 previously unknown primates found in Yunnan Province in China that show that primates took a different path in Asia. Instead of anthropoids, strepsirrhine (lemur-like) primates were dominant. It is still unknown whether this difference was due to the environment or chance.