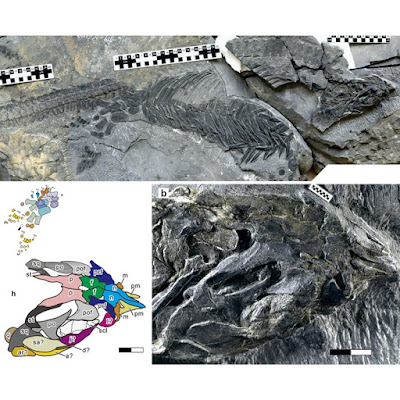 Abstract
Contrary to the fast radiation of most metazoans after the end-Permian mass extinction, it is believed that early marine reptiles evolved slowly during the same time interval. However, emerging discoveries of Early Triassic marine reptiles are questioning this traditional view. Here we present an aberrant basal ichthyosauriform with a hitherto unknown body design that suggests a fast radiation of early marine reptiles. The new species is larger than coeval marine reptiles and has an extremely small head and a long tail without a fluke. Its heavily-built body bears flattened and overlapping gastral elements reminiscent of hupehsuchians. A phylogenetic analysis places the new species at the base of ichthyosauriforms, as the sister taxon of Cartorhynchus with which it shares a short snout with rostrally extended nasals. It now appears that ichthyosauriforms evolved rapidly within the first one million years of their evolution, in the Spathian (Early Triassic), and their true diversity has yet to be fully uncovered. Early ichthyosauromorphs quickly became extinct near the Early-Middle Triassic boundary, during the last large environmental perturbation after the end-Permian extinction involving redox fluctuations, sea level changes and volcanism. Marine reptile faunas shifted from ichthyosauromorph-dominated to sauropterygian-dominated composition after the perturbation.

Etymology: Nasus (Latin nose) and rostrum (Latin beak), referring to the snout with the nasal bone reaching the tip. 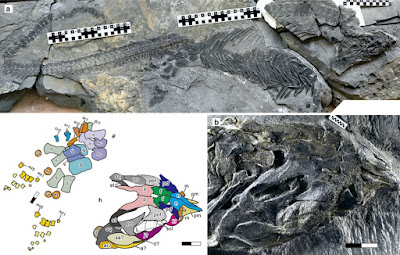 Locality and horizon: From the first level of Majiashan Quarry, Chaohu, Anhui Province, China. Bed 719, about 27 m above the bottom of the Upper Member of the Nanlinghu Formation, within the ammonite Subcolumbites zone, Spathian, Olenekian, Lower Triassic (Fig. 2).