Abstract
We describe a striking new species of the microhylid frog genus Mantophryne from Woodlark Island in Milne Bay Province, Papua New Guinea. It is most similar to M. lateralis but is distinguished from that species by its more slender body, longer shanks, larger discs on the toes, and unique advertisement call. Most known specimens had, in life, a striking golden tan mid-dorsum bordered by broad blackish dorsolateral bands. The new species is currently known only from the rainforests of Woodlark Island, where males call from elevated perches up to 4 m above the ground from climbing Freycinetia plants, from crevices and hollows in elevated limestone outcrops, and from tree buttresses and on top of fallen logs on the forest floor. It is the most arboreal member of this predominantly terrestrial genus discovered to date. 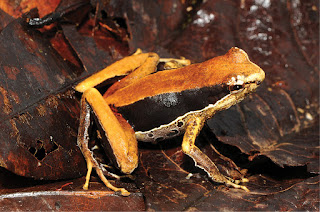 Distribution and ecological remarks: The three type specimens of Mantophryne insignis were detected by their calls, which were uttered at night from hidden perches 50–80 cm high in a limestone block, a tree buttress and a fallen log, all in lowland rainforest (30–180 m asl) in south-central Woodlark Island. However two of three additional specimens found calling on Woodlark Island by F. Kraus (pers. comm.) were approximately 4 m above the ground, in climbing pandanus (Freycinetia sp.) plants. The third specimen was calling from under a leaf on the forest floor. The slender body form, long legs and expanded toe discs (relative to congeners) reflect the unusually arboreal habits of this Mantophryne species. Given the uniformity of habitat across the island, and the lack of major topographic relief, it is likely that the species is widespread in lowland rainforest on Woodlark Island. This species has not been reported from any other islands in the region and may be endemic to Woodlark.

Etymology: The name insignis is derived from the Latin ‘insignis’ meaning remarkable or conspicuous, and refers to the species’ distinctive colour pattern and unusual (for the genus) ecology.