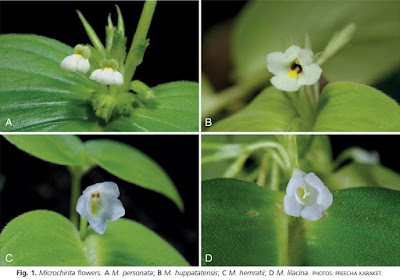 Habitat. Lithophyte, on bank over limestone rocks in secondary forest.

Conservation Status. Critically Endangered [CR B1ab(iii,iv)+B2ab(iii,iv)]. This species is only known from the type collection in the Huppatat Non Hunting Area, where only one, small population was observed. The limestone range there is only about 12 km2 in total and is subject to disturbance from tourism. There are no collections from the nearby Khao Pha Ra, and the area is surrounded by cultivated land.

Notes. Microchirita personata is the most immediately recognisable of the four new species and arguably the most distinctive species in the genus. Its main diagnostic feature is the personate corolla, a unique occurrence in Microchirita. The small corolla is also remarkable, with the entire flower hardly reaching 1 cm in length and the upper two lobes strongly reduced. M. personata appears most similar to M. woodii D. J. Middleton & Triboun (2013: 15) and M. huppatatensis, both with a corolla primarily white and with a smaller upper lip and expanded and slightly raised lower lip. These species, however, have much larger and non-personate flowers.

Habitat. Lithophyte, on bank over limestone rocks in secondary forest.

Conservation Status. Critically Endangered [CR B1ab(iii,iv)+B2ab(iii,iv)]. This species is only known from the type collection growing in a mixed population with Microchirita personata. Therefore, the same justifications apply.

Etymology. The new species is named after the type locality.

Habitat. Lithophyte on limestone in mixed deciduous forest.conservation status. Endangered [EN B1ab(iii,iv)+B2ab(iii,iv)]. The known EOO of this species would qualify it for Critically Endangered but the collecting localities are in a limestone range much of which has so far not been explored and where it is also likely to occur. Even if it were to occur throughout this range its EOO would still qualify it as Endangered. Parts of this range, including some of the known localities, are outside protected areas and subject to disturbance from visitors, particularly at the religious sites.

Etymology. The species is named in honour of Chandee Hemrat, one of the collectors of the types of all of the new species.
Notes. See notes under Microchirita lilacina.


Habitat. On limestone in dry and disturbed environments.
Conservation status. Endangered (EN B1ab(iii,iv)+B2 ab(iii,iv)). This species is known from disturbed roadside collections, with the exception of two collections in Doi Hua Mot Wildlife Sanctuary, over an area within the bounds of an EOO in the Endangered category. Its known localities are subject to disturbance.

Etymology. The plant is named after its pale lilac corolla.
Notes. Microchirita hemratii and M. lilacina belong to a group of species characterised by corolla colours ranging from pale lilac-white to blue. M. hemratii and M. lilacina have small corollas in comparison with most members of their group, which are also much darker in colour. The only species somewhat similar to them are M. suddeei, M. albiflora and M. karaketii D. J. Middleton & Triboun, all from Northern Thailand. M. karaketii is similar in the shape of the corolla tube, but differs in the colour pattern of the corolla, being white with a ventral yellow line and purple spots to either side of it. M. albiflora is pure white and differs from the other species in having its anthers free, a rare feature in Microchirita. M. suddeei is much closer to M. hemratii and M. lilacina, and the main difference is in the absence of the ventral yellow stripe in the flower, which is present in both the new species. Finally, one other important distinguishing feature between these closely related species is the indumentum dorsally on the anthers, which is present in M. suddeei and M. hemratii, reduced in M. karaketii and absent in M. lilacina and M. albiflora. 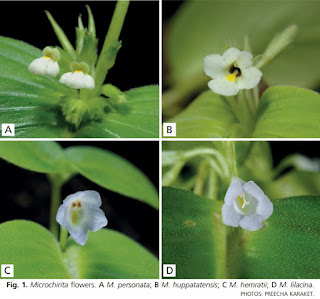