Abstract
The Bahamas Archipelago is currently known to support three of the 11 recognized species of West Indian boas (genus Chilabothrus) on the Little Bahama Bank, Great Bahama Bank, and four of the southern Bahamas banks. Here we report the discovery of a new species occurring on the Conception Island Bank, located 25 km ENE of Long Island and the Great Bahamas Bank. We describe Chilabothrus argentum sp. nov. (Conception Bank Silver Boa) on the basis of morphometric and genetic data obtained from six individuals. This new boa has a greatly reduced coloration relative to other Bahamian boas, is highly arboreal, and is 3.3% (pairwise) divergent from other West Indian boas in a mitochondrially encoded protein. We estimated a mitochondrial coalescent time of 2.7 million years for this species, and phylogenetic analysis suggests that it is sister to the C. strigilatus/C. striatus/C. exsul clade. The existence of this new boa provides greater resolution of the historical biogeography of the West Indian boas in the Bahamas Archipelago, further supporting multiple colonization of this region from Hispaniola as well as speciation and divergence events dating to the late Pliocene/early Pleistocene. We additionally discuss conservation implications and concerns for this new boa, which we have assessed as being critically endangered on the basis of the International Union for Conservation of Nature Red List criteria and hence find it to be one of the most endangered boid snakes globally. 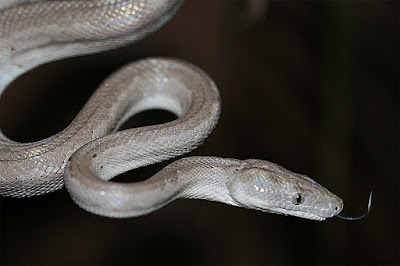