We describe two new species of frogs of the genus Pristimantis from the eastern slopes of the Ecuadorian Andes, at Parque Nacional Llanganates. The new species are characterized by the spiny appearance typical of several species inhabiting montane forests. Pristimantis yanezi sp. n. is most similar to P. colonensis and P. incanus but differs from both in groin coloration and by having smaller tubercles on the upper eyelids, heels, and tarsus. Pristimantis llanganati sp. n. is most similar to P. eriphus and P. chloronotus. It can be distinguished from P. eriphus by the color pattern on the scapular region and by having smaller conical tubercles on the dorsum. Pristimantis chloronotus differs from P. llanganati sp. n. in having a pair of sinuous paravertebral folds. Both new species occur in a region with few amphibian collections and nothing is known about their abundance and ecology. Therefore, it is recommended to assign them to the Data Deficient Red List category. Updated figures of species richness of Pristimantis among biogeographic regions in Ecuador are also presented. Pristimantis reach their highest diversity in Montane Forests of the eastern versant of the Andes. Its species richness across regions cannot be explained by regional area, elevation, temperature, or precipitation. Political endemism in Pristimantis is higher than that of other terrestrial vertebrates. 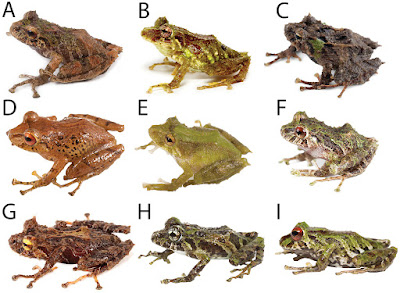