A new species of treefrog of the genus Osteocephalus is described from the Rio Abacaxis, a southern tributary of the Amazonas in the state of Amazonas, Brazil. This member of the O. buckleyi group is characterized by green dorsal colouration with irregular blotches of various shades of brown, light venter with tan spots and bold dark markings on the posterior surfaces of the thighs. It can be distinguished from its closest relative, O. helenae from the same general area, by the lack of an axillary membrane, a few indistinct tubercles on the proximal segment of Finger IV and single ulnar tubercles. 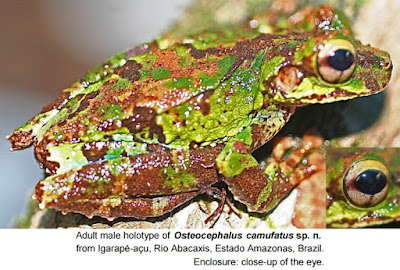 Etymology. The species name camufatus is the Latinized past participle of Italian camuffare, to disguise or mask, from which the word camouflaged is derived, in allusion to the shape-dissolving pattern of greens and browns of the new species.

Relationships. A molecular phylogenetic study (Jungfer et al. 2013) revealed that the new species is most closely related and sister to a clade consisting of the polymorphic and widely distributed O. helenae, a species occurring from coastal Guyana in the north throughout most of Amazonia, to Bolivia in the southwest, but is only distantly related to the morphologically similar O. buckleyi.