Abstract
A new species of the terrestrial haemadipsid genus Tritetrabdella, Tritetrabdella longiducta, from northern Indochina is described. The new species is distinguished from all congeners by the combination of triannulate somite VII, uniannulate somite XXV, three lobes of respiratory auricles in somites XXV–XXVII, 57 friction rays on caudal sucker, male gonopore (in somite XI b5/b6) and female gonopore (in somite XII b5) positions and slightly folded vaginal sac. Phylogenetic analyses using nuclear 18S rRNA and 28S rRNA, in addition to mitochondrial cytochrome c oxidase subunit I markers, confirmed that the new species forms a unique lineage among the known congeners. A key to all the species of Tritetrabdella is provided. 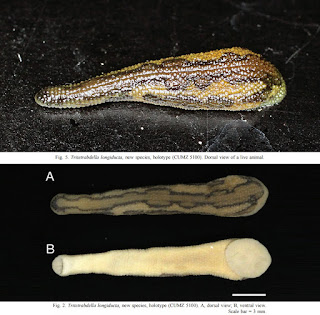 Distribution. Known only from the type locality and Ta Co, Son La Province in northern Vietnam (Fig. 1). The elevations of the localities were more than 700 m above sea level. The individual from Doi Phuka was found on soil around a decayed banana tree containing very high moisture.

Natural history. The hosts are not known because the specimens examined were collected free-living, but are presumed to include amphibians (Lai & Chen, 2010). The Vietnamese individual was collected when it was climbing the third author; therefore, mammals may also be hosts of T. longiducta.

Etymology. The specific name is a compound adjective derived from the Latin words, longus (long), and ductus (duct), referring to the fact that the common oviduct of this species nearly equals the length of its vaginal duct, a diagnostic character of the species.