[Ornithology • 2016] The Rediscovery of Strix butleri (Hume, 1878) in Oman and Iran, with Molecular Resolution of the Identity of Strix omanensis Robb, van den Berg & Constantine, 2013

Background: Most species of owls (Strigidae) represent cryptic species and their taxonomic study is in flux. In recent years, two new species of owls of the genus Strix have been described from the Arabian peninsula by different research teams. It has been suggested that one of these species, S. omanensis, is not a valid species but taxonomic comparisons have been hampered by the lack of specimens of S. omanensis, and the poor state of the holotype of S. butleri.

Methods: Here we use new DNA sequence data to clarify the taxonomy and nomenclature of the S. butleri complex. We also report the capture of a single S. butleri in Mashhad, Iran.

Results: A cytochrome b sequence of S. omanensis was found to be identical to that of the holotype of S. butleri, indicating that the name S. omanensis is best regarded as a junior synonym of S. butleri. The identity of the S. butleri captured in Mashhad, Iran, was confirmed using DNA sequence data. This represents a major (1,400 km) range extension of this species.

Conclusions: The population discovered in Oman in 2013 and originally named ‘S. omanensis’ actually represents the rediscovery of S. butleri, which was known from a single specimen and had not been recorded since 1878. The range of S. butleri extends into northeast Iran. Our study augments the body of evidence for the recognition of S. butleri and S. hadorami as separate species and highlights the importance of using multiple evidence to study cryptic owl species. 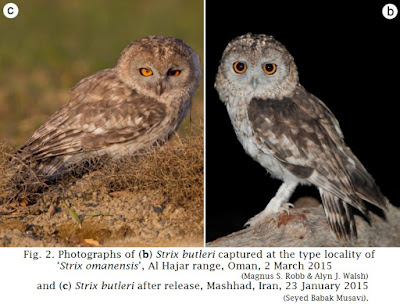