A new genus and species of snake eel, Suculentophichthus nasus, is described on the basis of a single specimen collected with a beach seine in 0.5–1 m depth at the northern beach of Eilat, Israel, Gulf of Aqaba, Red Sea. The new genus is characterized within the subfamily Ophichthinae by the tail which is much longer than the head and trunk; median fins low; origin of dorsal fin well in advance of pectoral-fin base; lower part of pectoral-fin base arising opposite upper one-fourth of gill opening, and occupying the upper one third of gill opening; gill openings sublateral, elongate, nearly vertical and crescentic, shorter than isthmus; eye moderately developed, its center above posterior third of upper jaw, its posterior margin well in advance of rictus; jaws moderately developed, lower jaw fits into upper jaw; snout conical, tapering evenly, its tip rounded; underside of snout with a median sulcus exposing the teeth in advance of the anterior nostril bases; anterior nostrils within short tubes; a large, succulent-leaf shaped flap behind anterior nostril; posterior nostril a hole above upper lip; teeth conical, erect, numerous, and small, anteriorly biserial and posteriorly uniserial on maxillary and biserial on mandible; a series of 6 vomerine teeth; and two preopercular pores. The new species is compared with other species of the subfamily and a key to the ophichthine eels of the Red Sea is presented.

Distribution. The species is only known from the type locality, Eilat, Israel, Gulf of Aqaba, Red Sea. The holotype was seined on shallow sand bottom, at a depth of 0.5–1 m. Another individual, presumably of the same species, was photographed near Eilat, also on sand bottom, at an unknown depth (Fig. 2). 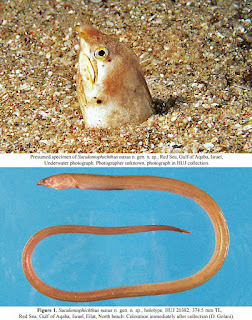