Abstract
The modern walrus, Odobenus rosmarus, is specialized and only extant member of the family Odobenidae. They were much more diversified in the past, and at least 16 genera and 20 species of fossil walruses have been known. Although their diversity increased in the late Miocene and Pliocene (around 8–2 Million years ago), older records are poorly known. A new genus and species of archaic odobenid, Archaeodobenus akamatsui, gen. et sp. nov. from the late Miocene (ca. 10.0–9.5 Ma) top of the Ichibangawa Formation, Hokkaido, northern Japan, suggests rapid diversification of basal Miocene walruses. Archaeodobenus akamatsui is the contemporaneous Pseudotaria muramotoi from the same formation, but they are distinguishable from each other in size and shape of the occipital condyle, foramen magnum and mastoid process of the cranium, and other postcranial features. Based on our phylogenetic analysis, A. akamatsui might have split from P. muramotoi at the late Miocene in the western North Pacific. This rapid diversification of the archaic odobenids occurred with a combination of marine regression and transgression, which provided geological isolation among the common ancestors of extinct odobenids.

Etymology: The generic name, Archaeodobenus, is named in Greek archaios meaning ancient, and the type genus name of the family Odobenidae.

Etymology: The species is named in honor of Dr. Morio Akamatsu, a curator emeritus of the Hokkaido Museum, for his longstanding contributions to geology and paleontology of Hokkaido, and in gratitude for his encouragement and assistance to both of us throughout this study. 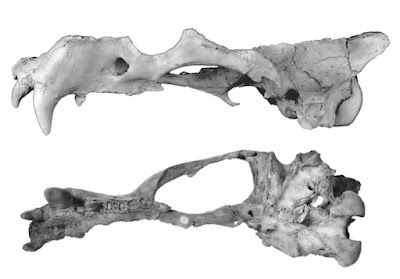 Conclusions:
Archaeodobenus akamatsui gen. et sp. nov. represents the second taxon of the archaic odobenids from the early late Miocene (ca. 10.0–9.5 Ma) Ichibangawa Formation, Hokkaido, northern Japan. The same formation has also produced the archaic odobenid Pseudotaria muramotoi Kohno, 2006. These two odobenids are distinguishable from another in size and shape of the occipital condyle, foramen magnum and mastoid process of the cranium, and some postcranial features. Phylogenetic analysis reveals that A. akamatsui has two synapomorphies that unites the new species with later diverging odobenids (i.e., Imagotaria downsi, Pontolis magnus, the “dusignathines” and the Odobeninae). Therefore, two closely similar odobenids having relatively ancestral characters (P. muramotoi) and relatively derived characters (A. akamatsui) both lived in the same area during the same age. Perhaps the coexistence of two morphologically similar archaic odobenids as represented by A. akamatsui and P. muramotoi in the early late Miocene suggest their rapid speciations by geographical and reproductive isolation during a regressive phase and subsequent transgressions. 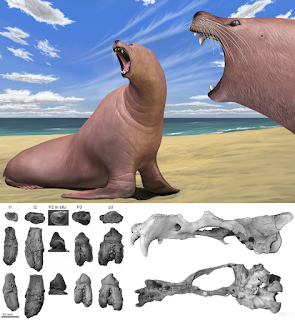