The taxonomic position of the Cape Parrot (Poicephalus robustus robustus) has been the focus of much debate. A number of authors suggest that the Cape Parrot should be viewed as a distinct species separate from the other two P. robustus subspecies (P. r. fuscicollis and P. r. suahelicus). These recommendations were based on morphological, ecological, and behavioural assessments. In this study we investigated the validity of these recommendations using multilocus DNA analyses. We genotyped 138 specimens from five Poicephalus species (P. cryptoxanthus, P. gulielmi, P. meyeri, P. robustus, and P. rueppellii) using 11 microsatellite loci. Additionally, two mitochondrial (cytochrome oxidase I gene and 16S ribosomal RNA) and one nuclear intron (intron 7 of the β-fibrinogen gene) markers were amplified and sequenced. Bayesian clustering analysis and pairwise FST analysis of microsatellite data identified P. r. robustus as genetically distinct from the other P. robustus subspecies. Phylogenetic and molecular clock analyses on sequence data also supported the microsatellite analyses, placing P. r. robustus in a distinct clade separate from the other P. robustus subspecies. Molecular clock analysis places the most recent common ancestor between P. r. robustus and P. r. fuscicollis / P. r. suahelicus at 2.13 to 2.67 million years ago. Our results all support previous recommendations to elevate the Cape Parrot to species level. This will facilitate better planning and implementation of international and local conservation management strategies for the Cape Parrot.

Introduction:
Accurate species delimitation plays an important role in effective conservation of biodiversity and assisting conservation authorities with the planning and implementation of appropriate conservation strategies. The utility of subspecies in conservation has been a subject of controversy for a long time. It has been shown that in some cases subspecies do not form separate phylogenetic clusters and classifying taxa to subspecies rank can be misleading. Subsequently, subspecies are not always given the same conservation consideration as species, especially with less well studied taxa, which can hinder protection of genetically distinct lineages. This is particularly relevant to birds where Phillimore and Owens estimated that roughly 36% of traditionally defined avian subspecies from North America and Eurasia form distinct phylogenetic clusters. It is therefore important to critically identify such phylogenetically distinct lineages and where appropriate elevate subspecies to species so that they can be given adequate conservation consideration.

The recognition of the South African taxon Poicephalus robustus robustus as a species separate from P. r. fuscicollis and P. r. suahelicus has been a controversial subject over the last few decades. The P. robustus clade exhibits an allopatric geographical distribution, with most species restricted to forest habitats. Within the P. robustus group, the west African P. r. fuscicollis is found in Red Mangrove forests, mature wooded savannah and palm woodlands. This species was once widely distributed from Angola through to West Africa but is now primarily found in Gambia. The subspecies P. r. suahelicus occurs in a wide variety of woodland habitats and is widely distributed in the south-eastern region of the Democratic Republic of Congo, south-western Uganda, Rwanda, north-western Tanzania, Malawi, Zambia, Mozambique, Zimbabwe and the northern Limpopo province of South Africa. The South African subspecies P. r. robustus, however, is a habitat specialist and is almost exclusively restricted to the southern mistbelt (Afrocarpus/Podocarpus) forests of southern Africa (Fig 1). The distribution of the subspecies P. r. robustus and P. r. suahelicus are reported to overlap in the Limpopo Province of South Africa, but there is strong evidence that the two taxa are ecologically separated by habitat and altitude with P. r. robustus found in mixed Afrocarpus/Podocarpus mistbelt forests above 1000 m and P. r. suahelicus preferring mixed woodland habitats below 800 m.

Our study is the most comprehensive analysis of the taxonomic relationships within the P. robustus clade using molecular data. The clear genetic differentiation of P. r. robustus from P. r. fuscicollis and P. r. suahelicus coupled with the differences in morphology, habitat and dietary needs provides strong scientific evidence for the elevation of P. r. robustus to P. robustus sensu stricto. Our results are sufficient to provide conservation authorities with strong evidence that the South African endemic Cape Parrot should be viewed as a Vulnerable species of conservation priority. This recognition will in turn assist the biodiversity conservation sector to prioritize, plan and implement conservation strategies. 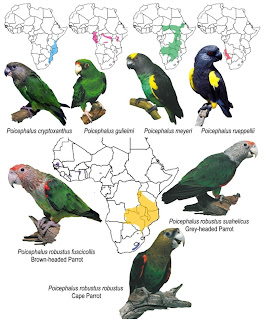