Abstract
Australian death adders (genus Acanthophis) are highly venomous snakes with conservative morphology and sit-and-wait predatory habits, with only moderate taxonomic diversity that nevertheless remains incompletely understood. Analyses of mitochondrial and nuclear gene sequences and morphological characteristics of death adders in northern Australia reveal the existence of a new species from the Kimberley region of Western Australia and the Northern Territory, which we describe as Acanthophis cryptamydros sp. nov. Although populations from the Kimberley were previously considered conspecific with Northern Territory death adders of the A. rugosus complex, our mtDNA analysis indicates that its closest relatives are desert death adders, A. pyrrhus. We found that A. cryptamydros sp. nov. is distinct in both mtDNA and nDNA analysis, and possesses multiple morphological characteristics that allow it to be distinguished from all other Acanthophis species. This study further supports the Kimberley region as an area with high endemic biodiversity.

Etymology. The specific epithet is modified from the Greek words kryptos (cryptic, hidden) and amydros (indistinct, dim) in reference to the cryptic nature of the species and its indistinct appearance relative to its surroundings making its presence unknown to predators and prey. Used as a noun in apposition

Distribution. Acanthophis cryptamydros sp. nov. is known from the Kimberley region of Western Australia. The species’ range in Western Australia is known to extend from Wotjulum (WAM R11241) in the west, 45 km north-north-east of Halls Creek in the south (WAM R70690), and Kununurra in the east (WAM R137470).
Acanthophis cryptamydros sp. nov. is also known to occur on some offshore islands including Koolan, Bigge, Boongaree, Wulalam, and an unnamed island in Talbot Bay (Palmer et al. 2013).
A single specimen (NTM R29109) with incomplete data (no collection date or precise latitude and longitude) is reported as occurring from Adelaide River in the Northern Territory (Fig. 1); however, this locality may be in error. Further collecting from the area may resolve the issue.

Habitat and ecology. The holotype (WAM R174083) was collected early morning towards the end of the ‘wet season’ (early March) from among basalt boulders in savannah woodland at the edge of a low plateau near a small sandstone outcrop. Vegetation among the basalt boulder habitat was dominated by Eucalyptus tectifica and Corymbia greeniana amongst mixed shrubs over mixed groundcovers and annual/perennial grasses (Fig. 9). Shrub cover was dominated by Grevillea mimosoides, Grewia retusifolia, Indigofera sp. and Olearia arguta (Fig. 9). The specimen was observed retreating to grass tussocks after being disturbed. The specimen was tightly coiled within the grass tussock before attempting to move to another tussock when disturbed. WAM R145216 was collected from thick grasses on a creek bank subjected to minor sheet flooding at Little Mertens Falls. Collection notes and accession data of other specimens describe individuals collected from among grasses or leaf litter in sandstone habitats. One specimen was collected from under a rock in a vine thicket near a beach on an unnamed island in Talbot Bay (WAM R172034), and another from leaf litter in Acacia woodland on Wulalam Island (WAM R172035). Two specimens were collected from roads or tracks (WAM R70690, WAM R165567).

Remarks. The A. rugosus group is likely to contain a number of undescribed species. Taxonomic resolution of this group will further define differences between individual species within the group and A. cryptamydros sp. nov. The discovery of A. cryptamydros sp. nov. as a previously undescribed major lineage within Acanthophis highlights the incompleteness of our understanding of phylogenetic structure and species limits within the genus. At the same time, it also highlights the importance of the Kimberley region of Western Australia as a center of endemism (Doughty 2011; Oliver et al. 2012; Pepper & Keogh 2014).

Lethal ingestion of the cane toad (Rhinella marina) has been documented in previous studies on Acanthophis specimens from the Kimberley region and Northern Territory (Phillips & Shine 2007; Hagman et al. 2009; Phillips et al. 2010; Pearson et al. 2014) indicating the species is likely to be at risk of significant decline as cane toads continue to move west across the Kimberley region. A detailed assessment on potential threats to the species including cane toads will identify the need for listing as a species requiring protection under state or federal legislation. 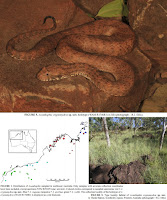