Abstract
Based on newly collected material from the Kavieng Lagoon Biodiversity Survey, we
describe a new species of cone snail, Conus hughmorrisoni sp. nov., from the vicinity of Kavieng, New Ireland, Papua New Guinea. It closely resembles the New Caledonian C. exiguus and the Philippine C. hanshassi, but differs from these species by having more numerous shoulder tubercles, by the shell’s sculpturing and details of the color pattern. We also sequenced a fragment of the mitochondrial COI gene of five specimens collected alive. All possessed very similar sequences (genetic distances < 0.3%), different from all the COI sequences of cone snails available in GenBank (genetic distances > 10%).

Etymology: This new species is named in honour of Hugh Morrison from Perth, Western Australia. He is a well known malacologist, shell dealer and pioneer scuba diver. He led the team of divers on board the MV PNG Explorer during the Kavieng Lagoon Biodiversity Survey. He is among the leading experts in Australian shells, and a dear friend of the first author 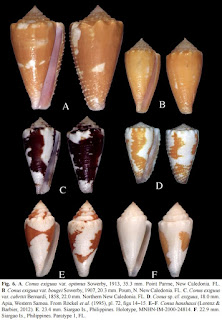