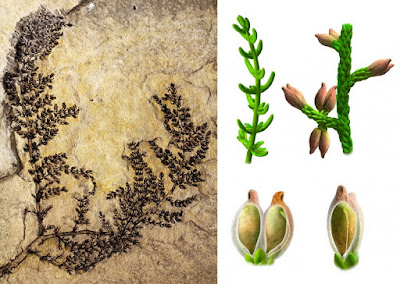 Abstract
The early diversification of angiosperms in diverse ecological niches is poorly understood. Some have proposed an origin in a darkened forest habitat and others an open aquatic or near aquatic habitat. The research presented here centers on Montsechia vidalii, first recovered from lithographic limestone deposits in the Pyrenees of Spain more than 100 y ago. This fossil material has been poorly understood and misinterpreted in the past. Now, based upon the study of more than 1,000 carefully prepared specimens, a detailed analysis of Montsechia is presented. The morphology and anatomy of the plant, including aspects of its reproduction, suggest that Montsechia is sister to Ceratophyllum (whenever cladistic analyses are made with or without a backbone). Montsechia was an aquatic angiosperm living and reproducing below the surface of the water, similar to Ceratophyllum. Montsechia is Barremian in age, raising questions about the very early divergence of the Ceratophyllum clade compared with its position as sister to eudicots in many cladistic analyses. Lower Cretaceous aquatic angiosperms, such as Archaefructus and Montsechia, open the possibility that aquatic plants were locally common at a very early stage of angiosperm evolution and that aquatic habitats may have played a major role in the diversification of some early angiosperm lineages.