Abstract
A new species of eagle ray, Aetomylaeus caeruleofasciatus sp. nov., is described based on specimens collected in northern Australia and southern Papua New Guinea. The new species is very closely related to Aetomylaeus nichofii and was previously considered to be conspecific with this species. The new species and A. nichofii differ from their congeners in having a dorsal pattern of seven or eight transverse pale blue bands. As with other eagle ray species, morphological characteristics which distinguish the closely related species were largely obscured by intraspecific variation. The clearest morphological differences were apparent when comparing adult males to adult males and adult females to adult females, e.g. disc longer in adult female A. caeruleofasciatus compared to adult female A. nichofii. The two species also differ in the number of pelvic radials in both females and males and show subtle colour differences. A neotype is also allocated for A. nichofii. 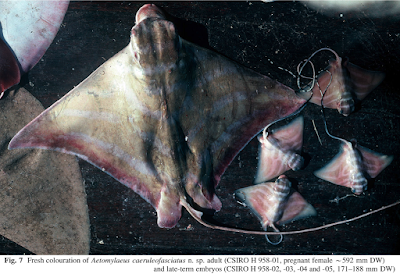