Abstract
The early evolution of sauropod dinosaurs remains poorly understood, with a paucity of unequivocal sauropod taxa known from the first twenty million years of the Jurassic. Recently, the Early Jurassic of South Africa has yielded an assemblage of dental and post-cranial remains displaying a more apomorphic character suite than any other similarly aged sauropodomorph. These remains are interpreted as a new species of basal sauropod and recovered cladistically as the sister taxon to Vulcanodon +more derived Sauropoda, underscoring its importance for our understanding of this pivotal period of sauropod evolution. Key changes in the dentition, axial skeleton and forelimb of this new species suggest a genuine functional distinction occurring at the sauropodiform-sauropod boundary. With reference to these changes, we propose a scenario in which interdependent refinements of the locomotory and feeding apparatus occurred in tandem with, or were effected by, restrictions in the amount of vertical forage initially available to the earliest sauropods. The hypothesized instance of niche-partitioning between basal sauropodan taxa and higher-browsing non-sauropodan sauropodomorphs may partially explain the rarity of true sauropods in the basal rocks of the Jurassic, while having the added corollary of couching the origins of Sauropoda in terms of an ecologically delimited ‘event’.

Holotype: The neural arch of an anterior dorsal vertebra (BP/1/6882) that is missing the dorsal apex of the neural spine.

Type locality and horizon: The Pulanesaura material was obtained from a small (3 m × 3.5 m) quarry on the farm Spion Kop 932 in the Senekal District of the Free State, South Africa (Fig. 1). The quarry is located just over a kilometer East-North East of the holotype locality of Aardonyx celestae, in a higher stratigraphic position than that taxon within the early Jurassic upper Elliot Formation. The much smaller Arcusaurus pereirabalorum was recovered from the edge of the same quarry, and a detailed schematic of the excavation is figured (see also Supplementary Information Fig. S1). The upper Elliot Formation on Spion Kop consists of a series of stacked channel sandstone bodies with little intervening overbank siltstones, the quarry itself being situated in a poorly bedded, coarse to sandy siltstone lens. The two-dimensional geometry and internal facies relationships of this lens suggests that it represents the fill of a low-energy, cut-off channel. Most age estimates suggest that the upper Elliot Formation is no younger than the Pliensbachian (183–191mya), with a consensus range of late Hettangian to Sinemurian (i.e., ~200mya or younger). 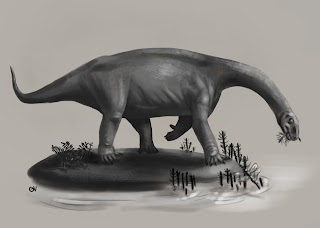