[Herpetology • 2015] Tylototriton podichthys • Morphological and Molecular Variation in Tylototriton (Caudata: Salamandridae) in Laos, with Description of A New Species

The salamandrid genus Tylototriton is poorly known in Laos, with one described species and unverified reports of two others. We undertook new fieldwork and obtained samples of Tylototriton at six localities across northern Laos during 2009–2013. Bayesian phylogenetic analysis of mitochondrial DNA, principal component analyses of 13 mensural characters, and qualitative morphological comparisons with samples from across the geographic range of Tylototriton were performed. Samples from Laos fell into four molecular and morphological groups, consisting of T. notialis, T. panhai, T. anguliceps, and a fourth lineage that is hypothesized here to be an undescribed species. Tylototriton podichthys sp. nov. is distinguished from its congeners by having distinct mitochondrial DNA haplotypes and in characteristics of the glandular skin on the head and body, shape of the rib nodules, and coloration of the body and limbs. This study expands the number of confirmed Tylototriton species in Laos from one to four, with the description of one species and extension of the ranges of T. panhai and T. anguliceps to Laos. An improved understanding of the geographic ranges of T. podichthys sp. nov. and T. anguliceps within Laos is needed. 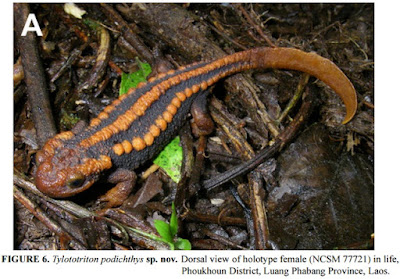 Subgenus: The new species is assigned to the subgenus Tylototriton Dubois & Raffaëlli 2009 (= T. verrucosus species group of Fei et al. 2005) based on its phylogenetic position (Fig. 1) and having orange coloration on limbs and lateral surfaces of tail (Nishikawa et al. 2014).

Etymology. The specific epithet is a noun in apposition taken from pod Gr., foot, and ichthys Gr., fish, in reference to the Lao language name pa theen, ປາຕີນ, meaning “fish with feet,” that is widely used for newts (Tylototriton and Laotriton) in Laos. 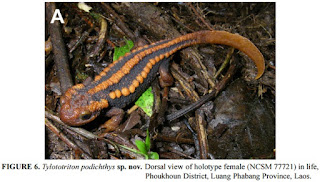