We review the state-of-the-art approaches currently applied in myriapod taxonomy, and we describe, for the first time, a new species of millipede (Ommatoiulus avatar n. sp., family Julidae) using high-resolution X-ray microtomography (microCT) as a substantive adjunct to traditional morphological examination. We present 3D models of the holotype and paratype specimens and discuss the potential of this non-destructive technique in documenting new species of millipedes and other organisms. The microCT data have been uploaded to an open repository (Dryad) to serve as the first actual millipede cybertypes to be published. 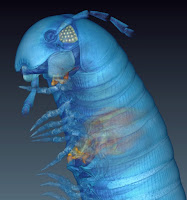 Fig 2. Ommatoiulus avatar n. sp.
Volume rendering highlighting genitalia and other sexual characters in the cybertypes. (A) Holotype male with highlighted gonopods, first pair of legs and mandibular stipites. (B) Paratype female with highlighted vulvae and eggs. Images not to scale. 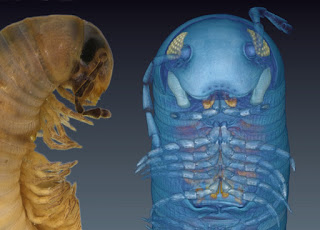