Highlights:
• Detailed molecular phylogeny of Parkia.
• Strong geographical phylogenetic signal in all clades.
• Origin of the genus in Amazonia.
• Long-distance dispersal to Paleotropics.
Abstract
Parkia R.Br. (Leguminosae, Caesalpinioideae, mimosoid clade) is a pantropical genus with approximately 35 recognized species in three taxonomic sections (Parkia, Platyparkia and Sphaeroparkia), distributed widely in tropical forests and savannas in South and Central America, Africa-Madagascar and the Indo-Pacific region. In this study, phylogenetic analyses (Maximum Likelihood and Bayesian Inference), ancestral area and habitat estimations were performed using chloroplast (matK, trnL, psbA-trnH and rps16-trnQ) and nuclear (ITS/18S/26S) DNA sequences for the purpose of testing the monophyly of Parkia and inferring the geographic origin of the genus and times of divergence of the various lineages. This enabled investigation of factors that may have influenced its diversification in both hemispheres. Our results support the monophyly of the genus. A fossil-calibrated Bayesian analysis dated the Parkia crown node to the Miocene (at c. 18.85 Ma). Biogeographic analysis reconstructed an origin in the lowlands rainforests (terra firme) in Amazonia with subsequent radiation in the Neotropical region from the Miocene onwards, with dispersion events as far as Central America, and the Atlantic Forest and the cerrado of Brazil. A single dispersion from the Neotropics to the Paleotropics is hypothesised, with subsequent smaller radiations in Africa-Madagascar and the Indo-Pacific (crown ages 3.79 and 5.15 Ma respectively). Factors that may have influenced the radiation and speciation of Parkia include the elevation of the Andes (especially in the Miocene), and more recently the closing of the Panama gap in Neotropics, the climatic fluctuations of the Pleistocene influenced the diversification of species on both continents. The elevation of the Sunda Shelf in Indo-Pacific region during the last glacial maximum (LGM) appears to be the main driving force for speciation in that region. In Africa, the low number of species may be related to extinction processes.
Keywords: Fabaceae, Divergence times, Last glacial maximum, Long-distance dispersal, Molecular phylogeny 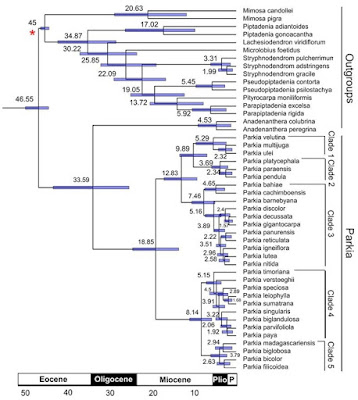 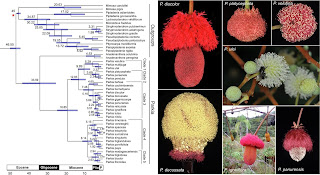