Abstract
Some brachyuran crab species of the Western Pacific appear to be widespread throughout the region and distributed across a large geographic area, without obvious phylogeographic structuring. In the present study, we describe a new species of Parasesarma that appears to be restricted to Western Pacific islands (so far Guam, Palau, Vanuatu, Fiji, Wallis and New Caledonia). Comparisons of partial sequences of the COX1 gene show that individuals of this species, though from relatively isolated and widely separated islands, are monophyletic and, surprisingly, genetically uniform. These results give credence to the hypothesis that these oceanic islands serve as ‘stepping stones’ for the current-mediated dispersal and genetic homogenisation of coastal–littoral marine species. Morphologically, the new species differs most significantly from similar congeners in the tuberculation pattern of the chelar dactyli, whereas genetically it is markedly divergent from other morphologically similar species of Parasesarma, with a minimum COX1 p-distance of 6.9%. With such evidence, the new species is here formally described as Parasesarma daviei sp. nov. It is the fifth species of Parasesarma reported from oceanic islands of the Western Pacific. Compared to other congeners, P. daviei sp. nov. shows a close relationship with a clade including P. calypso. Therefore, P. calypso (De Man, 1895), and three of its former subspecies or varieties were subjected to a closer examination and are here rediagnosed and illustrated. In consequence, we suggest full species status for P. kuekenthali (De Man, 1902), P. lanchesteri (Tweedie, 1936), and P. ellenae (Pretzmann, 1968).
Keywords: COX1, Fiji, Guam, Loyalty Islands, Palau, Parasesarma daviei, Vanuatu, Western Pacific. 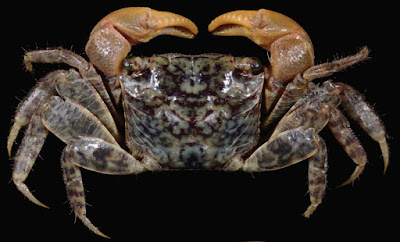