Abstract
Forty-nine years after the last description of a slippery frog, we describe a seventh species of the genus Conraua. The new Conraua is endemic to the Atewa Range Forest Reserve, central Ghana, and is described based on genetic, bioacoustics, and morphological evidence. Recent molecular phylogenetic and species delimitation analyses support this population as distinct from nominotypical C. derooi in eastern Ghana and adjacent Togo. The new species is sister to C. derooi, from which it differs ~4% in the DNA sequence for mitochondrial ribosomal 16S. Genetic divergences in 16S to other species of Conraua range from 4–12%. The new species is distinguished morphologically from its congeners, including C. derooi, by the combination of the following characters: medium body size, robust limbs, lateral dermal fringing along edges of fingers, cream ventral color with brown mottling, the presence of a lateral line system, indistinct tympanum, the presence of inner, outer, and middle palmar tubercles, and two subarticular tubercles on fingers III and IV. We compare the advertisement calls of the new species with the calls from C. derooi and find that they differ by duration, frequency modulation, and dominant frequency. We discuss two potential drivers of speciation between C. derooi and the new species, including river barriers and fragmentation of previously more widespread forests in West Africa. Finally, we highlight the importance of the Atewa Range Forest Reserve as a critical conservation area within the Upper Guinean biodiversity hotspot.
Keywords: Amphibia, Anura, biodiversity hotspot, conservation, integrative taxonomy, Upper Guinean Forest, West Africa. 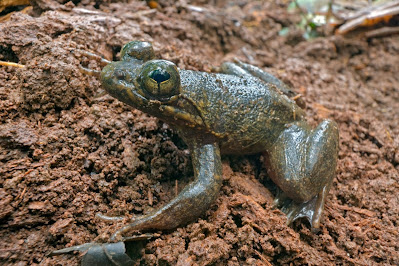 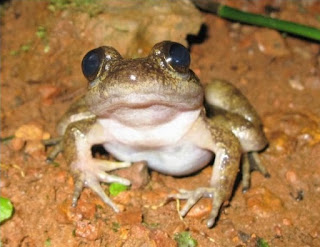 Conraua sagyimase sp. nov.
Diagnosis. The new species generally resembles other members of the genus Conraua Nieden, 1908. Conraua sagyimase sp. nov. is the smallest species of its genus and a mid-sized (SVL of adults: 53–89 mm) aquatic frog, relative to other frog species (see Womack & Bell 2020). It has smooth dorsal skin, covered with scattered small, rounded warts; skin on belly smooth; large and protruding eyes, positioned latero-dorsally; three odontoid projections on lower jaw, one on the symphysis and one on each side of the central one on the dentary; fully webbed feet, i.e., webbing extends to the end of the last phalange of toe, disc remaining free of web.
Etymology. The name of the new species has been chosen in order to honor the people of the Sagyimase community. This small community has supported the research of COB and the anti-mining campaigns during the early 2006–2007. We hope that the naming of this endemic species will further encourage this community in their fight for an intact Atewa Range. The species epithet is used as an invariable noun in apposition to the generic name. As English common name, we suggest Atewa Slippery Frog, and as Akan common name we suggest kwaeɛ mu nsutene apɔnkyerɛne, meaning the frog of the forest streams.