Abstract
The genus Kalophrynus is represented by tiny to medium terrestrial or subfossorial frogs and is widely distributed in Southeast Asia. The diversity centre of this genus is Borneo, where almost half of all nominal species are distributed and all of these are endemic to this and the peripheral islands. Kalophrynus nubicola is the smallest species within this genus; it is found only at high elevations in Gunung Mulu National Park, northeastern Sarawak, Malaysian Borneo. Three groups of populations were preliminary reported, but taxonomic decision on the groups was not yet given. In this study, we investigated the morphological, acoustic, and genetic differences among these three populations to reassess their taxonomic status. Morphological analyses confirmed differences in body size and colouration, molecular analyses indicated that each group was monophyletic, and differences in the acoustic characteristics of each group were also diagnostic. Therefore, herein, we describe them as distinct taxa. Phylogenetic analyses revealed that the K. nubicola group forms a highly divergent clade from other species within the genus. Our findings reveal that seven Kalophrynus species occur in Gunung Mulu National Park, with non-overlapping distributions according to elevation or forest type. We further discuss the biogeography and evolutionary history of this species group.
Keywords: Biodiversity, Gunung Mulu, Integrative taxonomy, molecular phylogeny, Southeast Asia 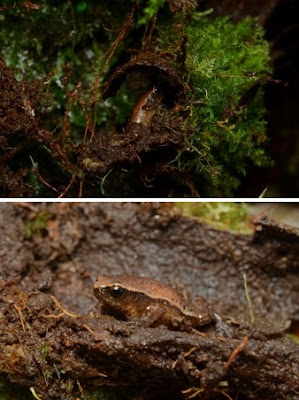 Kalophrynus dringi sp. nov.
Etymology. The specific name is dedicated to Mr. Julian Dring, who conducted herpetofaunal surveys at high elevations on Gunung Mulu and was the first to collect and study this species. 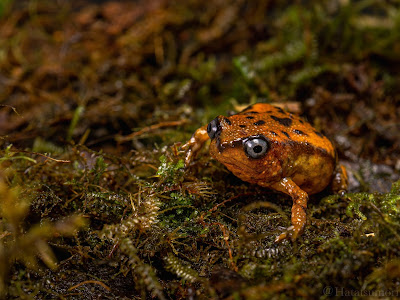 Kalophrynus puncak sp. nov.
Etymology. The species name is from the Malay word “puncak”, meaning summit, alluding to its habitat at summit of Gunung Mulu. 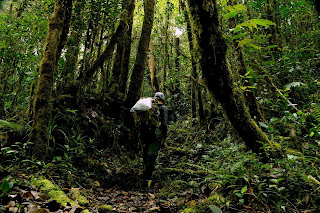