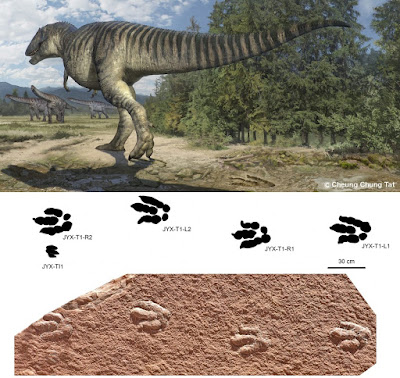 Abstract
The Jiaguan Formation and the underlying Feitianshan Formation (Lower Cretaceous) in Sichuan Province yield multiple saurischian (theropod–sauropod) dominated ichnofaunas. To date, a moderate diversity of six theropod ichnogenera has been reported, but none of these have been identified at the ichnospecies level. Thus, many morphotypes have common “generic” labels such as Grallator, Eubrontes, cf. Eubrontes or even “Eubrontes-Megalosauripus” morphotype. These morphotypes are generally more typical of the Jurassic, whereas other more distinctive theropod tracks (Minisauripus and Velociraptorichnus) are restricted to the Cretaceous. The new ichnospecies Eubrontes nobitai ichnosp nov. is distinguished from Jurassic morphotypes based on a very well-preserved trackway and represents the first-named Eubrontes ichnospecies from the Cretaceous of Asia.
Keywords: Ichnofossils, Dinosaur footprints, Theropod, Myths
Taxonomy of Jinyuxi site
Theropoda Marsh 1881
Eubrontidae Lull 1904
Eubrontes Hitchcock 1845, Olsen et al. 1998
Type ichnospecies E. giganteus Hitchcock 1836, Hitchcock 1845, Olsen et al. 1998
Eubrontes nobitai ichnosp. nov.
Holotype: A complete natural cast of a pes track represented by four footprint trackways was catalogued as JYX-T1-L1 from the Jinyuxi track site (Table 1; Figs. 2 and 3). The plaster mold is stored in the Zigong Dinosaur Museum.
Type horizon and locality: Lower Cretaceous, Jiaguan Formation, Jinyuxi track site, Gulin County, Sichuan Province, China.
Diagnosis: A relatively large-sized tridactyl footprint with pes length/width ratio of 1.4, weak mesaxony of 0.37, and relatively small divarication angle (about 47°) between digit II and IV. Digit III is 65% of the total pes length. Digit II is 85% of the length of digit III. The metatarsophalangeal pads of digit II are fairly well developed, with a size almost as large as the phalangeal pad of digit IV. The metatarsophalangeal pads lie sub-symmetrically on either side of the midline of the track. This is a feature that differentiates the tracks from many less symmetrical theropod tracks including some Eubrontes, Asianopodus and Chapus. Step length is about 2.6× footprint length, and the mean pace angulation is high (about 160°). E. nobitai is different from the type ichnospecies E. giganteus by (1) wider digit II–IV divarication, (2) weaker mesaxony, and (3) lower length/with ratio; and, different from E. zigongensis, E. veillonensis and E. nianpashensis by (1) smaller digit II–IV divarication and (2) weaker mesaxony.
Etymology: The specific name honors Mr. Nobi Nobita (known as Noby in the English versions). He is the protagonist of the Doraemon series. Japanese animated films Doraemon: Nobita’s Dinosaur in 1980 and Doraemon: Nobita’s New Dinosaur in 2020 are unforgettable dinosaur films. In the film, Mr. Nobita’s dream is to have a dinosaur named after him. 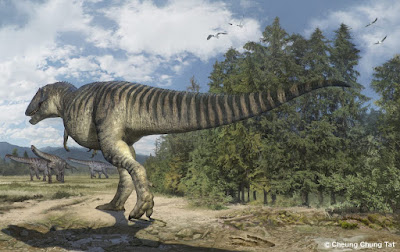 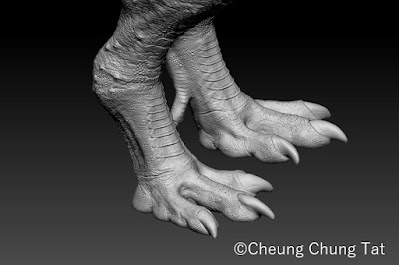 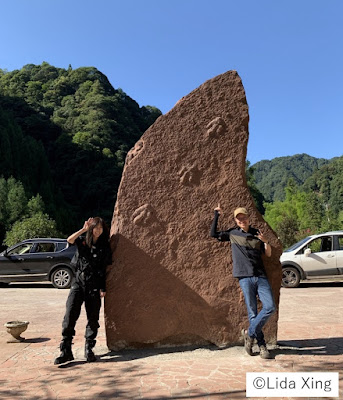 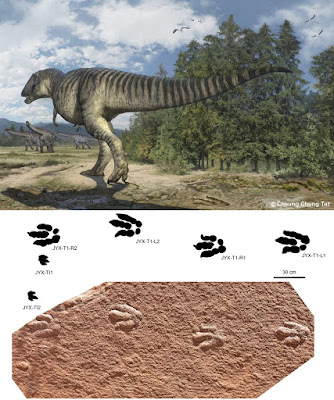 Conclusions:
Eubrontes nobitai described firstly in this study is found in a well-defined trackway, comprising four extremely well-preserved tracks: 3 on the 0–1–2-3 scale proposed by Belvedere and Farlow (2016); and is the only Chinese theropod ichnotaxon that bears a close resemblance to type Eubrontes. Therefore, it is an important theropod morphotype with the potential to help better understand the morphological variation of Eubrontes and Eubrontes-like tracks in space and time. Ongoing studies (Xing et al. 2021; Xing et al. in press) have noted that the large theropod tracks Asianopodus and Chapus need to be compared with such widely distributed theropod ichnogenera as Eubrontes to conduct further research.
Sauropod tracks from the Jinyuxi track site are classified in Brontopodus type tracks. This is consistent with the previous sauropod track records of the Jiaguan Formation. Some poorly preserved tracks show the affinity of deinonychosaurian tracks, which are also clearly recorded in the Jiaguan Formation. 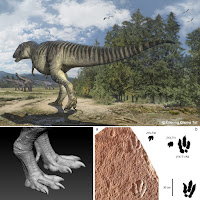 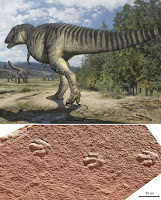