Abstract
The Placerias/Downs’ Quarry complex in eastern Arizona, USA, is the most diverse Upper Triassic vertebrate locality known. We report a new short-faced archosauriform, Syntomiprosopus sucherorum gen. et sp. nov., represented by four incomplete mandibles, that expands that diversity with a morphology unique among Late Triassic archosauriforms. The most distinctive feature of Syntomiprosopus gen. nov. is its anteroposteriorly short, robust mandible with 3–4 anterior, a larger caniniform, and 1–3 “postcanine” alveoli. The size and shape of the alveoli and the preserved tips of replacement teeth preclude assignment to any taxon known only from teeth. Additional autapomorphies of S. sucherorum gen. et sp. nov. include a large fossa associated with the mandibular fenestra, an interdigitating suture of the surangular with the dentary, fine texture ornamenting the medial surface of the splenial, and a surangular ridge that completes a 90° arc. The external surfaces of the mandibles bear shallow, densely packed, irregular, fine pits and narrow, arcuate grooves. This combination of character states allows an archosauriform assignment; however, an associated and similarly sized braincase indicates that Syntomiprosopus n. gen. may represent previously unsampled disparity in early-diverging crocodylomorphs. The Placerias Quarry is Adamanian (Norian, maximum depositional age ~219 Ma), and this specimen appears to be an early example of shortening of the skull, which occurs later in diverse archosaur lineages, including the Late Cretaceous crocodyliform Simosuchus. This is another case where Triassic archosauriforms occupied morphospace converged upon by other archosaurs later in the Mesozoic and further demonstrates that even well-sampled localities can yield new taxa.
Keywords: Crocodylomorpha, Convergent evolution, Norian, Jaw, Diversity, Archosauriformes 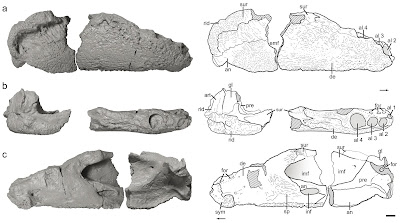 Systematic paleontology
ARCHOSAUROMORPHA von Huene 1946 sensu Benton 1985
ARCHOSAURIFORMES Gauthier et al. 1988
?CROCODYLOMORPHA Walker 1968 sensu Sereno et al. 2005
Syntomiprosopus gen. nov.
Syntomiprosopus sucherorum gen. et sp. nov.
Locality and horizon: The Downs’ Quarry, at a stratigraphic level slightly above the primary “Placerias Quarry” bone level but approximately 1 m below the principal Downs’ Quarry horizon (see stratigraphy and age; Fig. 2). Detrital zircons indicate a maximum depositional age of 219.39 ± 0.16 Ma for this assemblage (Ramezani et al. 2014).
Diagnosis:
The presence of denticulated thecodont teeth and an external mandibular fenestra constrain Syntomiprosopus sucherorum to at least within Archosauriformes (Nesbitt 2011). Syntomiprosopus sucherorum differs from all other archosauromorphs by the following combination of character states: a small external mandibular fenestra is present; an interdigitating suture of the surangular with the dentary; a laterally extensive, rounded, and heavily sculptured surangular ridge on the lateral side of the surangular; a low length-to-depth ratio of the mandible (length:depth ~2.5:1)*; a surangular ridge that completes a 90° arc posteriorly on the lateral side of the surangular*; a dentition restricted to the anterior half of the dentary and consisting of 8 or fewer teeth; anterior and posterior teeth separated by a large (“caniniform”) tooth in the third or fourth position; teeth with a lingual “heel” at their bases; procumbent anterior dentition; uniquely and coarsely sculptured lateral surfaces of the angular, surangular, and dentary*; a well-defined foramen intermedius oralis caudalis bordered medially by the splenial and angular; fine sculpturing consisting of low grooves on the medial surface of the splenial*; well-defined dentary symphysis located on the ventral half of the anteriormost portion of the medial side of the element. Local autapomorphies are identified with an asterisk.
Together with the paratypes, Syntomiprosopus is also unique in that it has a variable number of tooth positions anterior and posterior to the identified “caniniform” tooth and high variability in sculpturing of the lateral surfaces of the angular, surangular, and dentary and the medial surface of the splenial.
Etymology: The genus name comes from the Greek syntomi- meaning “short” and -prosopus, meaning “face” in reference to the greatly shortened mandible relative to contemporaneous archosauriforms. The specific epithet sucherorum is in honor of Scott (“Major”) and Karen Sucher, who have spent much time and effort over the last 22 years supporting paleontological excavations by ABH and his crews, including participating in and otherwise supporting excavations at the Downs’ Quarry that yielded Syntomiprosopus.
Conclusions:
Syntomiprosopus represents a new taxon with a morphology that is dramatically different from any contemporaneous relative, regardless of whether it is a non-archosaurian archosauriform or a crocodylomorph. If Syntomiprosopus is a non-archosaurian archosauriform, it is a relatively late-surviving taxon coexisting with diverse crown-group archosaurs. If, as the associated posterior portion of the skull suggests, it represents an early diverging crocodylomorph, then it reveals a surprising range of morphological innovation among early members of this clade. This new taxon is another example of a Triassic archosauriform taxon whose general morphology is converged upon by later Mesozoic taxa, in this case the short-snouted crocodyliform Simosuchus from the Late Cretaceous of Madagascar. Finally, in spite of the extensive history of collecting vertebrates at the Placerias/Downs’ Quarry complex, which is the most diverse nonmarine Triassic tetrapod locality currently known, Syntomiprosopus demonstrates that even well-studied localities have the potential to yield surprising new taxa.
Andrew B. Heckert, Sterling J. Nesbitt, Michelle R. Stocker, Vince P. Schneider, Devin K. Hoffman and Brian W. Zimmer. 2021. A New Short-faced Archosauriform from the Upper Triassic Placerias/Downs’ Quarry Complex, Arizona, USA, expands the Morphological Diversity of the Triassic Archosauriform Radiation. The Science of Nature. 108, 32. DOI: 10.1007/s00114-021-01733-1
twitter.com/clepsydrops/status/1411056298020552704
เขียนโดย pskhun ที่ 11:05 AM