Abstract
Parotocinclus kwarup, new species, is described as a new hypoptopomatine cascudinho from tributaries of the upper Xingu River in the Amazon basin of Brazil. The new species is distinguished from its congeners in northeastern and southeastern Brazil by having the cheek canal plate elongated posteriorly on the ventral surface of the head and in contact with the cleithrum. Parotocinclus kwarup, new species, is diagnosed from other species of Parotocinclus in the Amazon, Orinoco, and Guianas watersheds by the number of oral teeth, the snout length, having odontodes on the ventral surface of the first pelvic-fin ray bent and pointing mesially, lacking a Y-shaped light marking dorsally on the head (from the posterodorsal margin of orbit to posterior parieto-supraoccipital tip), lacking premaxillary and dentary accessory teeth, and having an adipose fin. The extinction risk of the new species is preliminarily assessed as Least Concern based on its wide distribution area and its inferred presence in the large Xingu Indigenous Park. 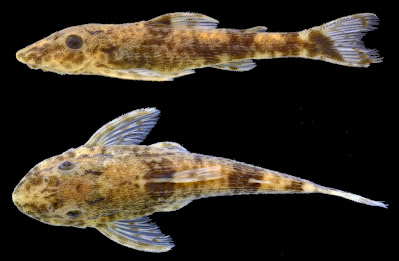 Parotocinclus kwarup, new species
Etymology.— Parotocinclus kwarup in named after the Kwarup (also known as Kuarup or Quarup), an annual ritual celebrated by the upper Xingu indigenous people in honor of their beloved dead, that originally aimed to bring them back to life. A noun in apposition. This name is in honor to the nearly 5,500 people belonging to 14 different ethnicities that currently live in the Xingu Indigenous Park, which plays an essential role in the conservation of this and other fish species.
Pablo Lehmann A. and Roberto E. Reis. 2021. A New Species of the Armored Catfish Parotocinclus (Loricariidae: Hypoptopomatinae) from the Upper Xingu River Basin, Brazil. Ichthyology & Herpetology, 109(2); 449-455. DOI: 10.1643/i2021046
twitter.com/IchsAndHerps/status/1400478613011681285
เขียนโดย pskhun ที่ 3:20 AM