Abstract
Four species of pumpkin toadlets are currently recognized by the extreme condition of hyperossification in the skull and vertebral column within the genus Brachycephalus. In addition to their larger body size, relative to other congeneric species, Brachycephalus darkside, Brachycephalus ephippium, Brachycephalus garbeanus, and Brachycephalus margaritatus share remarkable osteological features, such as the large paravertebral plates forming an ornamented dorsal bone shield, visible through the integument. We add to the current knowledge of this group by analyzing its diversity and describing a new hyperossified species from some important Atlantic Forest remnants in southeastern Brazil, including those bordering São Paulo, the largest and most populous city in South America. The new species is diagnosed by a combination of morphological, osteological, and bioacoustic characters, with further evidence of mtDNA sequences to confirm its distinction from the other congeners. The parotic and paravertebral bone plates externally bordered with a rough and pale contour can readily distinguish the new species from the other hyperossified species within Brachycephalus. The new species is widely distributed along the Serra do Mar mountain range, including the regionally named Serra de Paranapiacaba, in elevations from 700 to 1000 m above sea level (a.s.l.), in the central coast of the state of São Paulo, southeastern Brazil. We discuss valuable morphological characters within this group of species, reinforce the need for further studies, and highlight the relevance of protected areas for biodiversity conservation in metropolitan regions.
KEYWORDS: Bone shield, Brachycephaloidea, Hyperossification, Miniaturization

Brachycephalus ibitinga sp. nov.
Brachycephalus cf. nodoterga: Pie et al. (2013:167), in part
Brachycephalus sp.: Trevine et al. (2014:129), in part; Bornschein et al. (2019a:16), in part
Brachycephalus sp. 4: Condez et al. (2020:671), in part
Etymology.— The specific epithet ibitinga is a Portuguese noun derived from the indigenous Tupi-Guarani words yby + tinga. These words mean respectively ‘‘land’’ and ‘‘white,’’ which together compose a name applied to describe the fog, or mist condition characteristic from the mountains at the Atlantic Forest, where the new species occurs. In Portuguese, the translation for this weather condition is ‘‘Neblina’’: the whitish perception and limited visibility typically caused by fine water droplets suspended in the atmosphere. The type locality ‘‘Parque das Neblinas’’ is also named after this atmospheric condition. 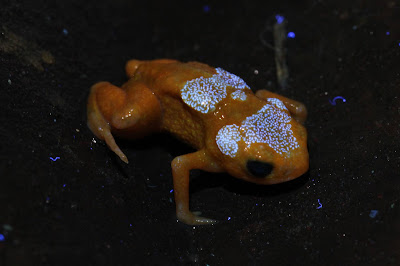 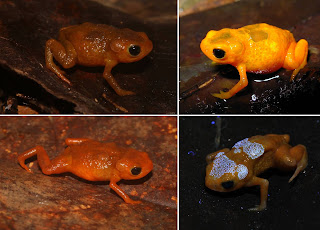