Abstract
Boana xerophylla is a common treefrog widely distributed in northern Brazil, Colombia, French Guiana, Guyana, Panama, Suriname, Trinidad and Tobago, and Venezuela. A recent study found molecular, acoustic, and morphometric differences between the populations located on opposite sides of the Orinoco River. Here, we carry out an updated molecular phylogenetic analysis, including new samples from all the countries along the distribution area, and analyzed additional call recordings from Brazil, Colombia, French Guiana, Panama, Trinidad and Tobago, and Venezuela. Our phylogenetic inference reveals three geographically restricted lineages: one in the eastern Guiana Shield (corresponding to B. xerophylla sensu stricto), another in the western Guiana Shield, and a third one north of the Orinoco River. Morphological and acoustic data agree with the differentiation between the populations north of the Orinoco River and the eastern Guiana Shield despite the low genetic p-distances observed (16S rRNA: 0.7–2.2 %). We argue that the populations north of the Orinoco River correspond to a new species, sister of B. xerophylla. We name and describe Boana platanera sp. nov. from the southern versant of the Cordillera de Mérida (08º__ N, 70º__ W, WGS 84; 947 m asl), Venezuela, and refer all the populations north of the Orinoco River currently identified as B. xerophylla to this species. The new species can be readily diagnosed from B. xerophylla (characters of the latter in parentheses) by a pale orange-yellow or light brown dorsal coloration (dark brown to green), palpebral membrane with dark pigments (pigments absent); pericloacal region dark brown (cream), advertisement call with shorter first note length than B. xerophylla. This study represents an empirical example regarding false negatives behind genetic thresholds for species discovery, appraising the use of integrative taxonomic approaches. 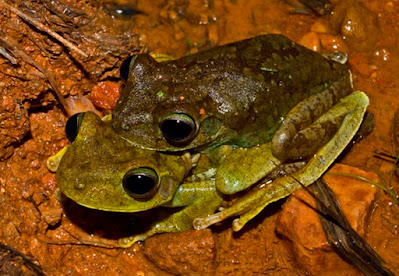 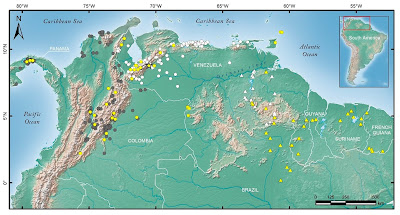 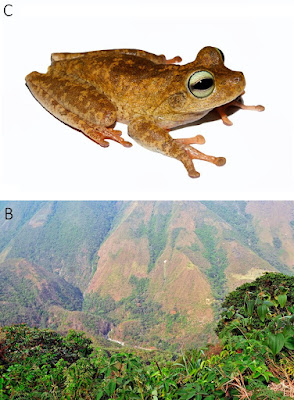 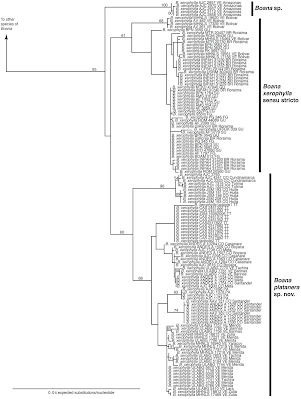 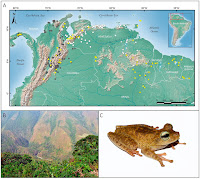