Abstract
A new species of horned toad, Megophrys ombrophila sp. nov., is described based on specimens found from Guadun village from Mount Wuyi in northwestern Fujian Province, China. The species is distinguished from other described Megophrys by morphology, bioacoustics, and molecular data of the 12S and 16S mitochondrial loci. The species is characterized by its rotund stature, head length approximately equal to head width, canthus rostralis well developed, tympanum large and distinct, vomerine teeth absent, margin of tongue smooth, not notched from behind, heels of the feet not meeting when femurs are held at 90° to the axis of the body and tibias are depressed against the femur, toes weakly webbed at base, dorsal skin mostly smooth with scattered granules and ridges, usually the presence of two discontinuous dorsolateral ridges, supratympanic fold distinct and well-developed, and with females ranging from 32.8–35 mm snout-to-vent length, and males ranging from 27.4–34.5 mm SVL. In its type locality, the species is sympatric with M. boettgeri and M. kuatunensis; and phylogenetically, the most closely related described species is M. obesa from southwest Guangdong province. As more cryptic species are described within the subfamily Megophryinae, the more apparent becomes the need for fine-scale molecular and phenotypic assessment to capture the many forms of this hyper-diverse group.
Keywords: Amphibia, Anura, Megophryidae 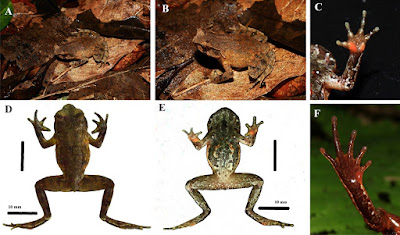