Abstract
Despite a considerable amount of research, the systematics of the ranid genus Huia have remained unresolved, mostly owing to insufficient sampling and morphological similarities. As currently circumscribed, Huia consists of five species, but multiple studies have consistently demonstrated that it is not a monophyletic genus. However, no study has approached the problem with adequate data and provided a systematically sound solution, leaving the genus to languish in a classification that is phylogenetically incoherent. We generated the most comprehensive sampling of Huia to date, based on extensive fieldwork in Java and Sumatra. Using an integrative taxonomy framework, we analysed four mitochondrial and two nuclear markers and, in conjunction with tadpole morphology, investigated the phylogenetics of Huia and its congeners. Corroborating previous studies, Huia is recovered as a paraphyletic group. Huia cavitympanum emerges as the sister taxon to Meristogenys. The remaining members of Huia form a monophyletic group, sister to the H. cavitympanum + Meristogenys clade. Our extensive geographical sampling in Sumatra and Java reveals multiple highly divergent lineages that potentially represent undescribed species. Using our expanded molecular and morphological dataset, we resolve the paraphyly of Huia by restricting the genus to its type species and propose a new genus to accommodate the strongly supported clade of Sumatran and Javan populations previously belonging to Huia.
Keywords: Anura, cryptic species, genetics, Indonesia, new genera, paraphyly, phylogenetic systematics, Southeast Asia, species diversity, taxonomy 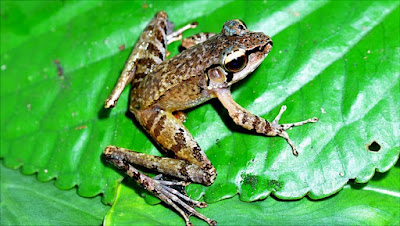