Porphyrocrinus daniellalevyae, new species, is described from irregular, hard-substrate, deep island slope habitats in the tropical western Atlantic Ocean (northwestern Bahamas and, probably, Honduras). It represents the first record of the genus from the western Atlantic, and is the first crinoid, living or fossil, known to gradually increase its number of rays with increasing size and, ostensibly, growth. The four known specimens have 8, 12, 14 and 15 radial ossicles, which give rise to undivided arms. The method of augmentation is unknown, although the possibility of autotomy of one and regrowth of two in its place is discussed. Augmentation of radial number may also account for the absence of an aboral nerve ring associated with the radial ring, unlike the arrangement in almost all living crinoids in which the nervous system has been examined. Ligamentary articulations (trifascial synarthries) exhibit fulcral ridge-and groove architecture between arm ossicle pairs that remains to be described for other members of the genus. The species also exhibits a filamentous arm tip lacking pinnules that has only been described for one other species of Porphyrocrinus. 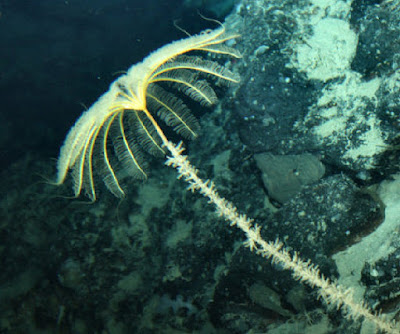