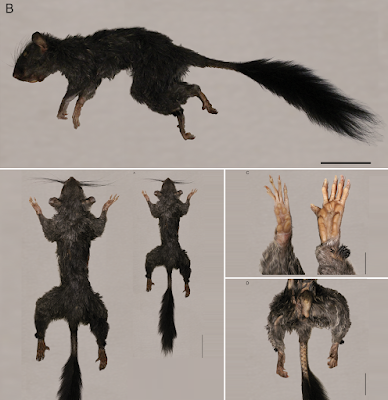 The “scaly-tailed squirrels” of the rodent family Anomaluridae have a long evolutionary history in Africa, and are now represented by two gliding genera (Anomalurus and Idiurus) and a rare and obscure genus (Zenkerella) that has never been observed alive by mammalogists. Zenkerella shows no anatomical adaptations for gliding, but has traditionally been grouped with the glider Idiurus on the basis of craniodental similarities, implying that either the Zenkerella lineage lost its gliding adaptations, or that Anomalurus and Idiurus evolved theirs independently. Here we present the first nuclear and mitochondrial DNA sequences of Zenkerella, based on recently recovered whole-body specimens from Bioko Island (Equatorial Guinea), which show unambiguously that Zenkerella is the sister taxon of Anomalurus and Idiurus. These data indicate that gliding likely evolved only once within Anomaluridae, and that there were no subsequent evolutionary reversals. We combine this new molecular evidence with morphological data from living and extinct anomaluromorph rodents and estimate that the lineage leading to Zenkerella has been evolving independently in Africa since the early Eocene, approximately 49 million years ago. Recently discovered fossils further attest to the antiquity of the lineage leading to Zenkerella, which can now be recognized as a classic example of a “living fossil,” about which we know remarkably little. The osteological markers of gliding are estimated to have evolved along the stem lineage of the Anomalurus–Idiurus clade by the early Oligocene, potentially indicating that this adaptation evolved in response to climatic perturbations at the Eocene–Oligocene boundary (∼34 million years ago). 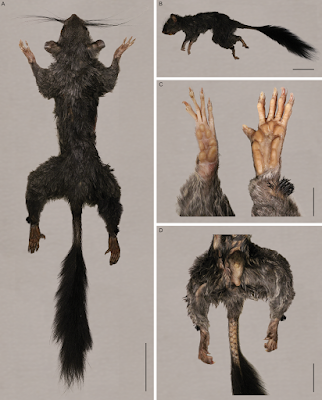 Researchers seek Zenkerella, an elusive scaly-tailed squirrel that has never been spotted alive by scientists http://phy.so/390543298 via @physorg_com 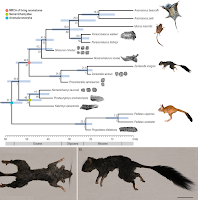 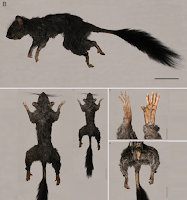