[Paleontology • 2016] A Small Azhdarchoid Pterosaur from the latest Cretaceous, the Age of Flying Giants

Pterosaur fossils from the Campanian–Maastrichtian of North America have been reported from the continental interior, but few have been described from the west coast. The first pterosaur from the Campanian Northumberland Formation (Nanaimo Group) of Hornby Island, British Columbia, is represented here by a humerus, dorsal vertebrae (including three fused notarial vertebrae), and other fragments. The elements have features typical of Azhdarchoidea, an identification consistent with dominance of this group in the latest Cretaceous. The new material is significant for its size and ontogenetic stage: the humerus and vertebrae indicate a wingspan of ca 1.5 m, but histological sections and bone fusions indicate the individual was approaching maturity at time of death. Pterosaurs of this size are exceedingly rare in Upper Cretaceous strata, a phenomenon commonly attributed to smaller pterosaurs becoming extinct in the Late Cretaceous as part of a reduction in pterosaur diversity and disparity. The absence of small juveniles of large species—which must have existed—in the fossil record is evidence of a preservational bias against small pterosaurs in the Late Cretaceous, and caution should be applied to any interpretation of latest Cretaceous pterosaur diversity and success. 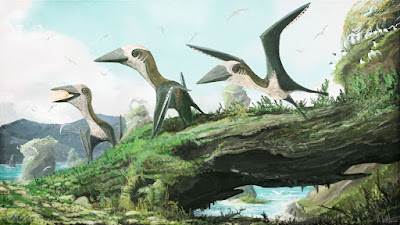 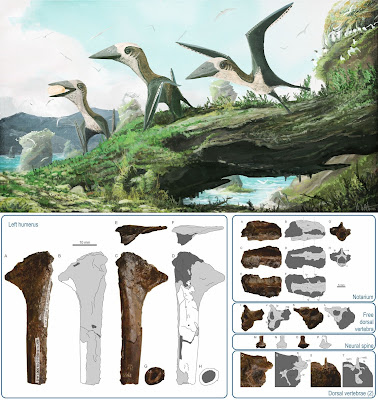 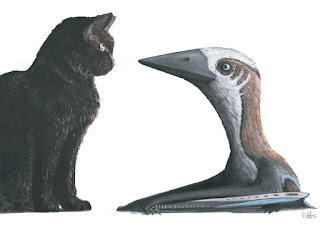 Paleontologists Find a Rare Type of Pterosaur Near Vancouver Island http://motherboard.vice.com/read/paleontologists-find-a-rare-type-of-pterosaur-near-vancouver-island via @motherboard
Our new pterosaur fossil shows birds and small reptiles flew side by side https://t.co/6RtkKEDGZP  via @ConversationUK