Abstract
A new species of spined loach, Cobitis takenoi sp. n., is described based on the holotype and ten paratypes collected from Tango District, Honshu Island, Japan. The new species is distinguished by a combination of the following character states: 1) the lamina circularis at the base of the pectoral fin in adult male having a simple roundish plate form; 2) a narrowing of the upper segments of the first branched ray of the pectoral fin; 3) a short maxillary barbel whose length equals diameter of the eye; 4) 14 prepelvic myotomes, and 5) L3 and L5 well developed, forming longitudinal obvious stripes in males during the spawning season. 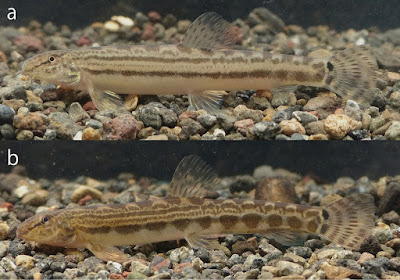 Remarks
Till date, Cobitis takenoi has only been found in one small river system, and the habitat is under threat from river improvement. In addition, some threatened freshwater fishes are captured and sold illegally in Japan (e.g. Parabotia curtus, Watanabe et al. 2015), and this new species is similarly at the risk of being commercially overfished for the ornamental fish market (Takeno et al. 2010). Therefore, the species is ranked as a critically endangered species (CR) – as Cobitis sp. – in the Japanese Red List (Kitagawa 2015). The distribution pattern, suitable habitat and life history of this species are not well-known. Basic biological investigations are required for its effective conservation.