Lentipes caroline n. sp., a freshwater goby, is described on the basis of 21 specimens (12 males, 9 females) collected from high gradient streams on the island of Pohnpei, Federated States of Micronesia. It differs from other species of the genus by a combination of characters including a urogenital papilla lacking lateral lobes and being not retractable into a sheath-like groove, 16 pectoral fin rays, pore O generally lacking, a small head (head length 18-24% of SL), many tricuspid teeth in the upper jaw in females (23-39), and a greyish body colour in both sexes, with only hints of brighter colours including occasional blue anal fin margining and gold blotching across the dorsum of many individuals. 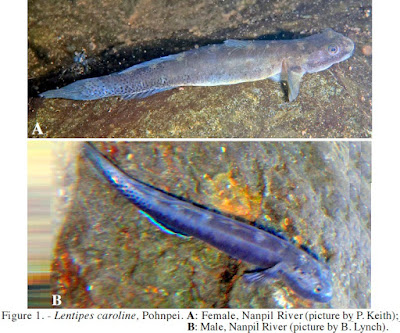