Theloderma is a widely distributed yet little-known genus of camouflaged tree frogs found throughout Southeast Asia. One member, T. phrynoderma, known only from the moist evergreen forest of the Karen Hills of Myanmar, is redescribed from two recently collected specimens and examination of type specimens. To date the only information available about T. phrynoderma is Boulenger’s brief 1893 description of two type specimens collected in 1888, and phylogenetic analyses to test its placement among other species of Theloderma is lacking due to an absence of specimens. In the present study, we compared two individuals collected in 2009 and 2010 from the Tanintharyi Nature Reserve to the type specimens of T. phrynoderma and proposed that they are also members of this species. We then used two mitochondrial genes (12S and 16S rRNA) and two nuclear genes (rhodopsin and tyrosinase) to infer the phylogenetic relationship of the putative T. phrynoderma to other members of Rhacophoridae, with a special emphasis on Theloderma. The recently collected individuals are of the same species within Theloderma but distinct from all other DNA sequenced congeners. The species redescription is based on a comparison of the newly found reference specimens with the lectotype and paralectotype. In addition, using a combination of morphological characters we provide a more complete diagnosis. The species is distinct from other congeners by a combination of the following characters: a mid-body size (female 44 mm SVL; male mean 41.3 mm SVL); tympanum diameter to eye diameter (70%); partial webbing between fingers; rugose skin with clumped, white-tipped calcified tubercles throughout the dorsal surface; webbing between fingers; distinct darker brown inverted V-marking between its shoulders; absence of vomerine teeth; and absence of vocal sacs. 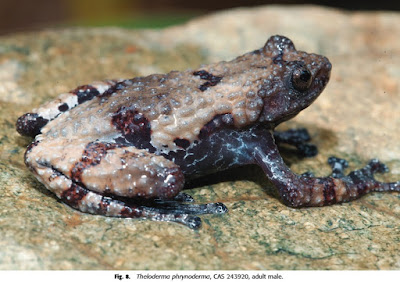 Geographic distribution.—This species is known from two localities in Myanmar (Fig. 1). The lectotype and paralectotype were collected in Thao, at an elevation of 1,300–1,400 a.s.l. The collected reference specimens were collected at a lower elevation of 59–82 a.s.l. from two sites in the TNR of northern Tanintharyi Division. Although separated by approximately 550 km, the Thao collection locality and Tanintharyi collection localities lie within a contiguous tropical-subtropical moist evergreen forest ecoregion (Olson et al., 2001).