[Herpetology • 2015] Rondonops biscutatus & R. xanthomystax • Description and Phylogenetic Relationships of A New Genus and Two New Species of Lizards from Brazilian Amazonia, with Nomenclatural Comments on The Taxonomy of Gymnophthalmidae (Reptilia: Squamata)

We describe a new genus and two new species of gymnophthalmid lizards based on specimens collected from Brazilian Amazonia, mostly in the "arc of deforestation". The new genus is easily distinguished from other Gymnophthalmidae by having very wide, smooth, and imbricate nuchals, arranged in two longitudinal and 6–10 transverse rows from nape to brachium level, followed by much narrower, strongly keeled, lanceolate, and mucronate scales. It also differs from all other Gymnophthalmidae, except Iphisa, by the presence of two longitudinal rows of ventrals. The new genus differs from Iphisa by having two pairs of enlarged chinshields (one in Iphisa); posterior dorsal scales lanceolate, strongly keeled and not arranged in longitudinal rows (dorsals broad, smooth and forming two longitudinal rows), and lateral scales keeled (smooth). Maximum parsimony, maximum likelihood, and Bayesian phylogenetic analyses based on morphological and molecular data indicate the new species form a clade that is most closely related to Iphisa. We also address several nomenclatural issues and present a revised classification of Gymnophthalmidae.

Etymology. Rondon (in homage to Cândido Mariano da Silva Rondon) + ops (from the Latin: power, might, strength, ability). The genus-group name is masculine, according to Article 30.1.4.3. The name refers to the accomplishments of Marshal Rondon (May 5, 1865–January 19, 1958), a Brazilian military officer who dedicated his life to the exploration and integration of remote areas of the Brazilian territory, especially of southwestern Amazonia, and to the peaceful integration of indigenous peoples of Brazil (Conselho Editorial do Senado Federal 2003). In 1910, he was nominated the first director of Brazil's Indian Protection Bureau (SPI/FUNAI) and, in 1914, conducted, with Theodore Roosevelt, a scientific expedition to explore the River of Doubt, now Roosevelt River (Diacon 2004; Roosevelt 1914). The Brazilian state of Rondônia, where we collected the first specimens of Rondonops , was also named after him.

Etymology. The specific epithet is an adjective formed from Bi (from the Latin: two) and scutatus (from the Latin: shield-shaped). The name refers to the arrangement of nuchals in two longitudinal rows, characteristic of the genus, but first noted in this species. 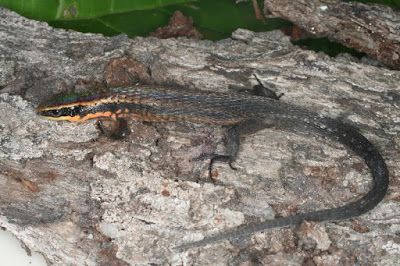 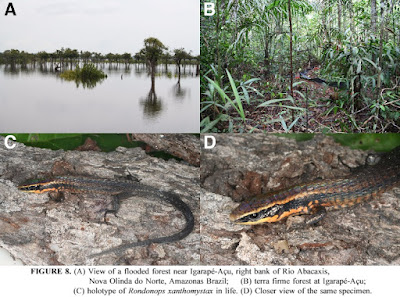 Etymology. The specific epithet is a noun derived from xanthos (Latin transliteration of the Greek ξανθός: yellow) and mustax (Latin transliteration of the Greek μύσταξ: upper lip or moustache) (Liddell & Scott 1889). The name refers to the yellow (in life) upper lip of this species, which strongly differs from that of its congener, where it is strongly mottled with dark brown.