Background – Anna is a small genus of Gesneriaceae, occurring in China and Vietnam. During fieldwork in Guizhou, China, a representative of this genus was discovered which did not match the description of any of the three known species.

Key results – A new species, Anna rubidiflora S.Z. He, F.Wen & Y.G. Wei, a stenochoric species from the southern part of China (Kaiyang county of Guizhou province), is described and illustrated. It differs from the morphologically similar species A. ophiorrhizoides (Hemsl.) Burtt & Davidson by being a larger plant with undivided stem, its entire leaf blade margins, its abaxial greenish-white leaf blades with slightly purple nerves, its obovate-lanceolate calyx lobes with truncate and nearly rounded apex without nerves, and its reddish-purple corolla. The newly described species is illustrated both by a line drawing and photographs. A locality and distribution map is also presented. A phylogenetic analysis confirmed that A. rubidiflora is a member of Anna and a close relative of A. ophiorrhizoides. 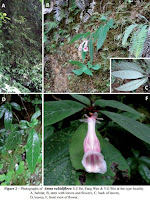 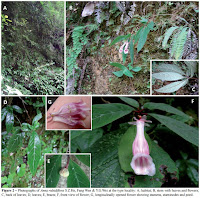