All ornithischian dinosaurs are herbivorous or omnivorous. Ornithischian Liaoningosaurus paradoxus Xu et al., 2001 is an ankylosaur. Here we report a new specimen of L. paradoxus from China. It contains a number of fish skeletons. We interpret those remains as stomach or gut contents and hence as strong evidence for the meat-eating diet of the dinosaur. With elongate and fork-like denticles of cheek tooth crowns, L. paradoxus has a dentition capable of penetrating into animals like small fishes. The carnivorous adaptation of the dinosaur is also supported by the ungual modification to a sharp claw in both the fore-and hind-limbs. The evolution of a shield-like ventral armor plate and the loose sacrum-pelvic connection suggest that L. paradoxus may have adopted an aquatic way of life,using the ventral armor plate to protect the body from underwater attacks; as such,the open suture between the neural arch and centrum of the vertebrae cannot be used to indicate the juvenile nature of the type specimen. L. paradoxus is the first carnivorous ornithischian dinosaur since dinosaur was first known in the 18th century and represents not only the first aquatic or semi aquatic example of armored dinosaurs but also the smallest species of ornithischian dinosaur so far known. 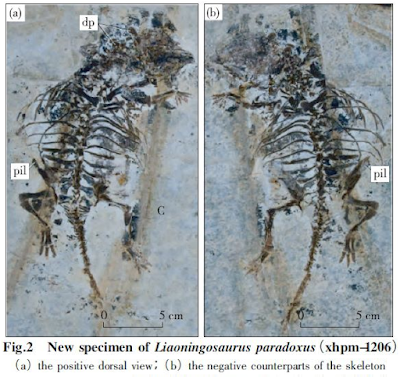 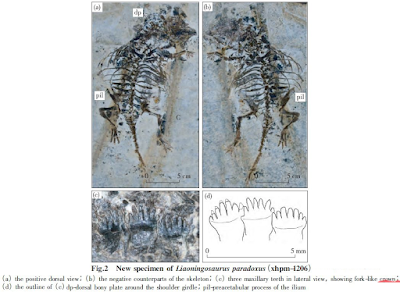